Output and stockpile projections for the week ending July 22 are based on six analyst estimates compiled by Bloomberg.

Spring-wheat yield estimate for the top US growing state of North Dakota is 48.9 bu/acre on the first of a three-day crop tour across the state.

Spring-wheat yields averaged 60.2 bu/acre after four stops along a route in southeast North Dakota, according to crop scouts.

Twelve vehicles will drive up to 50,000 km around Java island in testing the fuel that will have 40% palm oil content, says Dadan Kusdiana, Director General of New and Renewable Energy at the Energy and Mineral Resources Ministry in Jakarta on Wednesday.

EU soft-wheat exports during the season that began July 1 totaled 1.4m tons as of July 24, compared with 1.03m tons in a similar period a year earlier, the European Commission said Tuesday on its website.

Russia can’t rule out the risk of disruption to the deal to restart Ukraine’s grain exports, if obstacles to Russian agricultural exports are not eliminated, Interfax reported, citing comments by Deputy Foreign Minister Andrey Rudenko in Moscow. 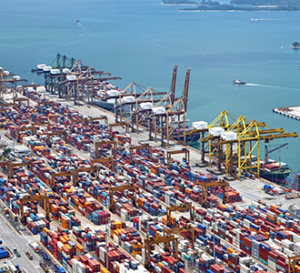 Turkey Says Ukraine Grain Exports Could Start Within a Week

Turkey said grain exports from Ukrainian ports could resume within a week and reach 25 million tonnes by the end of the year, after it brokered a deal between Kyiv and Moscow that eased fears of a global food crisis.

Exactly when exports halted by Russia’s invasion would begin will be determined by logistical groundwork, Turkish President Recep Tayyip Erdogan’s spokesman, Ibrahim Kalin, said in an interview on Tuesday.

As many as 100 vessels carrying grain and agricultural products were trapped in Ukrainian ports when war broke out. The United Nations expects the first to move within a few days, and an adviser to global insurers has proposed a mechanism that might help cover the trade.

A truck unloads barley at a grain terminal in Odesa region, Ukraine, on June 22.

Still, hitting Kalin’s forecast for exports by December could be a challenge. Analysis firm UkrAgroConsult says that the Black Sea ports in question — Odesa, Chornomorsk and Pivdennyi — have a maximum combined capacity of 3.5 million tons a month.

Turkey is due to open a joint operations center with Ukraine, Russia and the UN on Wednesday to coordinate trade under the agreement.

A Russian missile strike on Odesa after the deal was reached raised doubts about Moscow’s commitment to the accord, but Kalin dismissed the concerns. The UN later said all sides had reconfirmed their intent to make the deal work.

The agreement capped months of diplomacy by the Turkish leader, who has struck a delicate balance since Russian troops entered Ukraine in February.

NATO member Turkey has been vocal about its support for Ukraine and a company headed by Erdogan’s son-in-law has provided dozens of armed drones to bolster the Ukrainian military. Yet Ankara refrained from joining sanctions targeting Russia and kept lines of communication open with President Vladimir Putin.

“If everyone burns bridges with Russia, who’ll talk to them? We have seen [with this agreement] how important Turkey’s balancing act is,” Kalin said.

75% of spring wheat crops in the southwest in good condition and 20% in excellent condition, the province’s agriculture ministry says Tuesday in a report.

European Union soybean imports in the 2022/23 season that started on July 1 reached 890,412 tonnes by July 24, data published by the European Commission showed on Tuesday.

The Commission said the released data might not be complete to July 24, especially for Italy.

EU sunflower oil imports, most of which come from Ukraine, were at 96,673 tonnes, against 112,683 a year earlier, the data showed.

Past two weeks featured favorable conditions for corn in Ukraine. Temperatures across the country dropped below average and most top corn producing regions received near normal or above average rainfall. Cooler temperatures and rainfall surpluses were beneficial for the pollinating corn crop soon to enter grain fill. Crop vegetation density levels are above average in most of oblasts and up from last update across the country indicating improved crop conditions.

Latest weather forecast calls for continuation of cooler than average conditions with locally observed warmth. Precipitation-wise, upcoming days will feature rather dry conditions across Ukraine with below average rainfall expected. In few days conditions should improve. Near or above normal rainfall is likely across most of oblast, supporting beneficial conditions for corn crops. Cool and wet weather should continue to increase corn yield potential. On the other hand, heat and dry conditions could have adverse impacts on corn production.

Past two weeks featured favorable conditions for wheat across Ukraine. Cooler than average temperatures were noted across all oblasts. Precipitation-wise, a split pattern was observed with near normal or above average rainfall in north-eastern Ukraine and drier conditions noted in south-eastern regions. This cooler weather with near normal precipitation created beneficial conditions for wheat in last stages of grain fill. Latest NDVI analysis shows an increase of crop vegetation density across Ukraine indicating improved crop conditions and yield potential. We have adjusted yield estimates accordingly. Recent weather was also beneficial for harvesting gaining momentum. Around 1.2 million hectares (3.8 million tons) were already threshed by Ukrainian farmers, according to latest report of Ministry of Agrarian Policy and Food of Ukraine.

The leaders of China and Indonesia pledged to scale up trade and expand cooperation in areas such as agriculture and food security, following a rare visit to COVID-wary China by a foreign head of state.

The commitment by China, Indonesia’s No.1 trading partner, to deepen trade relations and fully back Indonesia’s chairmanship of the Association of Southeast Asian Nations (ASEAN) next year is an economic and political win for Jokowi, as the Indonesian president is widely known.

China hailed Indonesia as a model strategic partner, in contrast to its sharp words for the United States in recent months over issues from Taiwan and Ukraine to trade practices and the South China Sea.

“(China and Indonesia) have acted proactively and with a strong sense of responsibility to maintain regional peace and stability,” according to the joint statement.

“They have thus set an example of major developing countries seeking strength through unity and win-win cooperation.”

Indonesia is an important source of ferronickel, coal, copper and natural gas for the world’s second-largest economy.

In the first half of 2022, Chinese imports from Indonesia, mostly commodities, surged 34.2% on year, the most after Russia.

China has expressed commitment to import an additional one million tonnes of crude palm oil from Indonesia, said the Indonesian state palace.

Jokowi met Li and Xi at the Diaoyutai State Guesthouse, part of a sprawling complex of villas, lakes and gardens where many foreign leaders, including the late U.S. President Richard Nixon, have been received.

As president of the G20 this year, Jokowi has sought to mend rifts within the group exposed by Russia’s invasion of Ukraine.

Last month he travelled to Ukraine to meet President Volodymyr Zelenskiy and also to Moscow to hold talks with Putin. Jokowi said Indonesia was willing to be a “communication bridge” between the two.

Summer fill programs nudged US fertilizer prices lower again, with phosphate, ammonia and ammonium sulfate significantly below the spot market during the seasonal reset. Nutrien launched a muriate of potash (MOP) fill program at $765 a short ton at Midwest price points, down $40 from last week’s high.

China is still importing Belarusian potash, despite western sanctions that limit Belaruskali’s ability to ship tons. China imported 4.1 million metric tons of potash during 1H, down 11% from 1H21. Belarus remained a significant supplier, accounting for 25% of China’s monthly 1H imports. Belaruskali is seeking export alternatives to Lithuania, now inaccessible due to sanctions. Russia is a likely option, and Belaruskali reportedly signed a contract with St. Petersburg’s Keystone Logistics to ship 2 million tons of potash in containers through Petrolesport, Neva-Metal and Vladivostok. Rail is a potential option; there are two direct trains to China.

Nutrien and Mosaic are the largest publicly traded potash producers. Belarus accounts for about one-fifth of the global potash trade.