French wheat export prospects are rising due to higher demand from countries including China, Morocco, Algeria and Egypt, Paul Le Bideau, deputy head of grains and sugar at crops office FranceAgriMer, says at a press briefing. 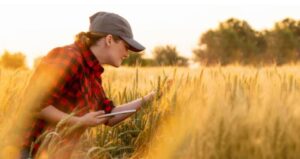 Estimate ranges are based on a Bloomberg survey of four analysts; the USDA is scheduled to release its export sales report on Thursday for week ending Dec. 8.

Ukraine’s grain exports during the season that began on July 1 totaled 19.7m tons as of Dec. 14, down 31.5% y/y, according to the Agriculture Ministry.

Argentina’s wheat production for the 2022/23 season is expected to be around 11.5 million tonnes, down from a previous estimate of 11.8 million tonnes, the Rosario Grains Exchange said on Wednesday.

Indonesia’s Oct. palm oil exports rose to 3.65m tons, from 3.18m tons in Sept., according to the Indonesian palm oil association, known as Gapki, in an emailed statement.

Rapeseed output in India is likely to rise to a record high in 2023 as higher prices have encouraged farmers to plant the main winter oilseed on nearly 9% more area than a year ago, trade and industry officials said.

Higher rapeseed production could help India, the world’s biggest importer of vegetable oils, cut expensive overseas purchases of cooking oils that cost the country a record $18.9 billion in the fiscal year to March 31, 2022.

India meets more than 70% of its cooking oil demand through imports of palm oil, soyoil and sunflower oil from Malaysia, Indonesia, Brazil, Argentina, Ukraine and Russia.

Farmers have so far planted rapeseed, which has the highest oil content among India’s nine main oilseeds, on 8.8 million hectares, up from 8.1 million hectares a year earlier.

“The rapeseed area can go up to 9.4 to 9.5 million tonnes this year, and that clearly suggests that rapeseed production will go up,” said B.V. Mehta, executive director of the industry body the Solvent Extractors’ Association of India.

“But weather conditions need to be favourable.”

“We have expanded the rapeseed area as the crop gives us better returns,” said Hajarilal Jaat, a farmer from Khandewat village in the north-western state of Rajasthan. Jaat has planted rapeseed on 31 acres this year, up from 19 acres last year.

But higher temperatures could reduce per hectare yields and limit the growth in the production, said Krishna Khandelwal, a trader based at Niwai in Rajasthan.

The crop needs lower temperature for higher yields, but temperature in the biggest producing north-western belt has been running 2 to 5 degrees Celsius above normal, weather department data showed.

Rice shippers in top exporter India are set to call on the government to scrap all curbs on overseas sales of the staple food after domestic supplies increased following the harvest of monsoon-fed crops.

The Rice Exporters Association will seek approval to ship at least 1 million tons of the broken variety, and request that the 20% tax on white rice exports be scrapped, said B.V. Krishna Rao, president of the group. The country has imposed limits on exports this year to protect local supplies and cap prices.

India usually accounts for almost 40% of world rice exports, and any relaxation of restrictions may cool prices in Asia, which have risen to the highest since June. It would also be a sign that concerns over global food security are easing in a boost to consumers in Asia and Africa. Countries ramped up protectionism earlier this year when crop prices soared after Russia’s invasion of Ukraine.

Rice purchases by the Indian government for its welfare programs have risen, indicating an improvement in local supplies, Rao said in an interview. The exporters association will formally approach the government “very soon” and urge it to lift the curbs as prices across the country have moderated, he said.

A rise in procurement by state agencies may prompt authorities to change their stance on restrictions at a time when global food inflation is weakening. A UN gauge of world food costs hit a record in March after the Russian invasion, but has since declined for eight straight months to the lowest since January.