Overnight trade has SRW up roughly 7 cents, HRW up 6; HRS Wheat up 5, Corn is unchanged; Soybeans unchanged, Soymeal down $1.50, and Soyoil up 30 points.

Malaysian palm oil prices were up 16 ringgit at 2,624 (basis October) at midsession recovering from two straight sessions of sharp losses.

The 6 to 10 day forecast for the Midwest sees fairly limited rains for most of the region; some rains are seen for most of Indiana and Ohio by early next week; temps will below average over the next 10 days.

Last evening’s GFS model run was wetter in Iowa Aug. 5 – 7; some of the increase in rainfall was likely needed due to the position of the ridge of high pressure.

The 11 to 16 day forecast for the Midwest turned a bit mixed with the European model showing a bit below average rainfall with temps to run below average; the GFS model has close to average precip and temps.

The 6 to 10 day forecast for the Southern Plains sees fairly limited rains with only light amounts and moderate coverage.

The spring wheat crop in North Dakota, the top U.S. producer of the grain, should yield less than last year due to a mix of dry June weather in the state’s western area and excessive rain in the southeast, crop experts said; the U.S. Department of Agriculture this month projected North Dakota’s spring wheat yield at 45 bushels per acre (bpa), down from 49 bpa a year ago, putting total production at 263 million bushels

The U.S. biofuel industry may have to depend on Agriculture Secretary Sonny Perdue for aid, Senator Chuck Grassley of Iowa said, after Senate Republicans unveiled a coronavirus relief package without specific appropriations for the industry; a provision of the $1 trillion HEALS Act, introduced by Senate Republicans, would make available $20 billion to Perdue to provide support for agricultural producers, growers and processors impacted by the coronavirus; the bill, however, does not designate the funds more specifically; we’re in a position of depending on the Secretary of Agriculture if this $20 billion goes to him, getting some of it for ethanol.

—Crops advancing quickly and generally in average to good condition, excepting low-lying areas subject to frequent rainfall over the past three weeks; winter cereals are reaching the hard dough stage and turning color; harvest is expected to begin in less than two weeks

—Corn and sunflowers are growing well with heat and moisture, tasseling and flowering are beginning

—Canola is suffering in places from excess moisture, but doing well in others

—Cereals are rated as mostly good to excellent.

The area planted with soybeans in Brazil is expected to increase by almost 3% in the next season, to a record 38 million hectares, while production is also projected to reach a historic 127.3 million tons, according Rabobank estimates; forecast to increase by 5.3% from last season.

Grains operations of Chinese food giant COFCO and U.S. agribusiness firm Bunge Argentina have been hit by the detection of cases of COVID-19 among workers, underscoring a challenge for the South American country as infection numbers rise; COFCO has temporarily suspended operations at its Timbues grains plant.

Russia has harvested 50.2 million tons of grain before drying and cleaning from 30.3% of the area with an average yield of 3.45 tons per hectare, data from the agriculture ministry showed

European wheat prices fell on Tuesday as expectations of ample Russian supplies and a strong euro weighed on sentiment; front-month September milling wheat was down 1% at 181.00 euros a ton 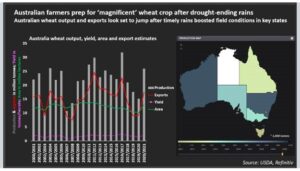