Malaysian palm oil prices were down 48 ringgit at 2,774 (basis December) weakened by a drop in crude oil prices.

U.S. Weather Forecast: The 6 to 10 day forecast for the Midwest sees a round of light to moderate rainfall across most of the region Friday through Sunday with the far western section of the Midwest seeing very light amounts. Temps will be running below average. The Southern Plains over the 6 to 10 day period sees little to no rainfall with light rains possible in the eastern sections of the region. Temps will be running below average.

South America Weather Forecast: The Brazilian growing regions look to see moderate rainfall in central/east sections of the region over the next 6 to 10 days with little in the way of rainfall for the rest of the areas. The Argentine growing regions look to see light rains form around 70% of the area over the next 5 days; the 6 to 10 day forecast has the models mixed with the GFS dry for all areas and the European model has light to moderate rainfall for the eastern sections of the growing region central to south. 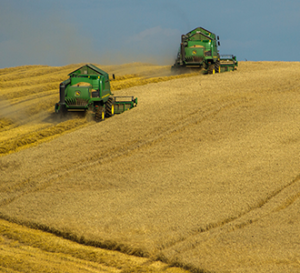 The U.S. soybean harvest was 20% complete as of Sunday, the U.S. Department of Agriculture said in a weekly crop progress report on Monday, ahead of the five-year average of 15%

—The corn harvest lagged slightly as producers focused on soybeans; the U.S. corn crop was 15% harvested, the USDA said, behind the five-year average of 16%

—Condition ratings for soybeans improved, with 64% of the crop rated in good to excellent condition, up 1 percentage point from a week earlier, the USDA said, while corn ratings were steady at 61% good-to-excellent

—Planting of the 2021 winter wheat crop was 35% complete by Sunday, ahead of the five-year average of 33%

The Illinois soybeans were the third of 16 U.S. Crop Watch fields to be harvested last week, and the results were extremely disappointing; but the fourth field, the Indiana corn, finished on a very strong note; the North Dakota producer was the only one of the eight who reported rampant harvest activity last week in the area, estimating completion on up to half of the soybean fields due to the super-dry status of the beans; elsewhere, growers reported normal or even slow harvest progress within the last week.

The Illinois soybeans were the third of 16 U.S. Crop Watch fields to be harvested last week, and the results were extremely disappointing. But the fourth field, the Indiana corn, finished on a very strong note.

The North Dakota producer was the only one of the eight who reported rampant harvest activity last week in the area, estimating completion on up to half of the soybean fields due to the super-dry status of the beans. Elsewhere, growers reported normal or even slow harvest progress within the last week.

US ethanol inventories are expected to increase this week, says Terry Reilly of Futures International; the firm says that it expects ethanol inventories to rise 50,000 to 150,000 barrels this week, bringing the total back over 20M barrels for the first time in roughly a month; for traders watching for signs of economic recovery, an increase of inventory would suggest a stagnation in fuel demand–bad news for corn farmers looking for demand stemming from ethanol consumption to recover; however, daily ethanol production is also expected to grow, by 7,000 barrels from 906,000 barrels per day last week.

China is aiming to produce 95% of its pork at home, according to a cabinet document outlining plans for its livestock sector, underscoring a goal to quickly rebuild its huge pig herd after a major disease epidemic; the document comes amid a heightened focus on food security by Beijing, with coronavirus outbreaks overseas impacting food exporters, and ongoing tensions with top trade partners raising concerns about supplies; the document did not mention a timeframe for achieving its target.

Brazilian farmers have begun planting for the 2020-2021 soybean growing season amid hot and dry weather that has left soil in dryer-than-ideal conditions, according to agricultural consultancy AgRural; as of Thursday, farmers had planted 0.7% of the area that AgRural has forecast will be sown with soybeans for the season, slightly behind the 0.9% planted on the same date last year and below the 2.7% five-year average for the date.

The loading of grains ships in Argentina was temporarily halted on Monday by a 24-hour strike by grains inspectors demanding higher wages and shorter working hours, the general manager of the country’s private ports chamber said; this measure generates economic losses for the sector and for the country; it makes operations more difficult and could generate breaches of international commercial commitments.

Russia’s agriculture ministry said on Monday that the country’s grain export quota mechanism, used in April-June amid the coronavirus outbreak, remains relevant despite the large crop its farmers are harvesting this year; Russia has said it could set the grain export quota for January-June 2021 if there is a need to secure domestic supplies; despite good prospects of harvest, the mechanism of non-tariff quotas for grain exports remains relevant and the agriculture ministry plans to improve and apply this measure in the future.

Soft wheat exports from the European Union and Britain in the 2020/21 season that started on July 1 had reached 4.37 million tons by Sept. 27, official EU data showed; that was 39% below the volume cleared by Sept. 29 last year.

Soybean imports into the European Union and Britain in the 2020/21 season that started on July 1 totaled 3.36 million tons by Sept. 27, official EU data showed; that was 1% above the volume imported in the previous 2019/20 season.

European wheat prices rose on Monday, following strength in U.S. markets, but gains were limited by a fall in rival Russian export prices after a month of strength; benchmark December milling wheat closed up 1.0 euro or 0.5% at 193.25 euros ($225.23) a ton after falling to its lowest since Sept. 17 at 191.00 euros earlier on Monday.