The petroleum complex continues to attract support as uncertainty over the underlying supply/demand prospects remain in the background as a supportive influence. The release of the International Energy Agency Monthly Report appeared to do little to ease these concerns despite revisions downward in their demand forecast.

The report suggested that world oil demand growth would slow to 1.9 mb/d from 4.4 mb/d in the 1st quarter while demand growth would slow even further in the second half to 490 t/bd. The increases would likely be most pronounced during the summer as seasonal uptick in driving and a pick-up in air travel leads to increases in the consumption of jet fuel and gasoline that could see demand increase by as much as 3.6 mb/d from April through August. For 2022, demand is expected to increase to 99.4 mb/d.

The IEA indicated Russia shut in nearly 1 mb/d of supply in April, pushing down global supplies to 98.1 mb/d. The expectation for gradual increases from Middle East producers along with continued improvement in US output should lead to a rise in production of 3.1 mb by the end of the year. Nevertheless, the potential for Russian supplies to decline by as much as 1.5-2.0 mb/d over the next few months raises the potential for what the IEA indicates as an “acute supply deficit.”

Although some relief from SPR releases and a slowdown in global economic growth has been noted, it appears that further declines in Russian production are likely as tougher sanctions by the EU and G-7 and the May 15th deadline to halt all transactions with Russian state-controlled oil companies take effect. With limited spare capacity in the global refining system, along with cutbacks in Russian deliveries of fuel oil, naphtha and gasoline, further tightness in product markets is expected given the low current inventories.

We still believe that supply tightness will continue, with prices having potential to test the 115 area in prompt WTI crude. 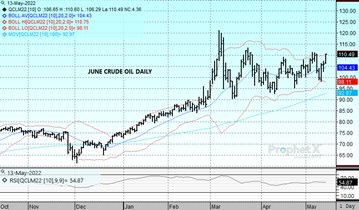 The market saw light volume today as trade took a bit of a breather after experiencing substantial price swings over the last two weeks. The June contract lost 7.6 cents to settle at 7.663.  Yesterday’s storage report showed an injection of 76 bcf, somewhat bullish as the consensus had settled in near 80 prior to the release. This puts total stocks 312 bcf below the 5-year average, and that deficit is not expected to improve as we work through the second half of May. The market found good buying interest after the release and traded up to 7.919 early this morning before running out of momentum. LNG flows slipped under 12 bcf/d the last two sessions, bringing out some selling interest as terminals continue to work through maintenance. Initial support now rests near 7.50, with a settlement above the 7.85 area likely necessary to jump start another test of the 8.50 level.