Mixed trade was seen early in the session as the market continued to waffle between recession concerns and current supply tightness. The crude and RBOB markets managed to find enough buying interest to close higher by $1.75 and 3 cents respectively, while the heating oil continued to search for support, ending the day with a loss of nearly 4 cents basis the September contract.

Early weakness in crude oil was traced to statements from a Russian diplomat involved in the JPCOA talks between Iran and the US that progress was being made and only a few issues remain. Although trust in the source along with the inconsistent messaging from Tehran make the statements unreliable, the potential for over 1 mb/d of production being added to the current short supply situation was enough to prod some selling interest. An improvement in Chinese crude oil imports in July helped turn the market higher while the fallout from Friday’s US employment numbers oscillated between positive hopes for demand and concern that the Fed could overdo rate increases and precipitate a recession.

With the market ending the session on its highs, near term action could see a test of resistance at the 9-day moving average near 93.25. A settlement below 88.50 is likely necessary to flush out follow through selling to a possible test of the 85 level.

Wednesday’s storage report points to crude and gasoline stocks decreasing by 400 tb, while heating oil is expected to be unchanged. Refinery utilization is estimated to have improved by .9 to 91.9 percent. 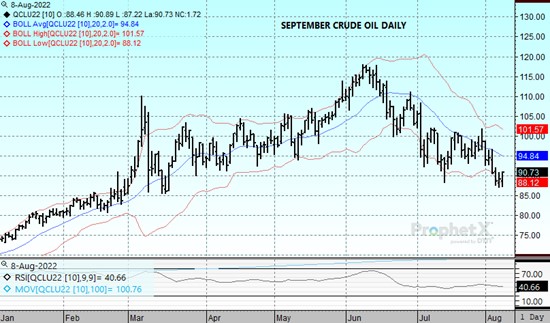 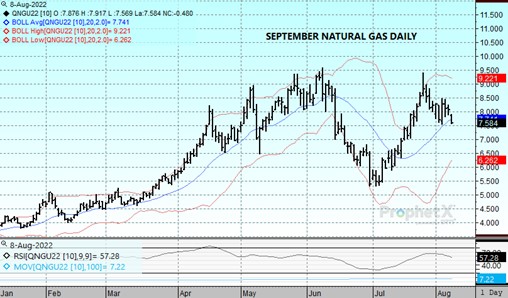 Natural gas prices started the week with a negative tone as weekend forecasts cooled compared to Friday’s runs. Production was sustained near 98 bcf, marking the tenth straight day in that area and adding to the downside bias. With late revisions recently coming in as high as 1 bcf, today’s 97.6 early runs could end up being a new yearly high output level when all is said and done. LNG performing poorly over the weekend, coming in below 10.5 bcf Friday through Sunday, making fundamentals negative across the board. With comparatively cool temperatures expected for the coming week, the market looks poised to probe lower near term. A close below 7.50 could portend a move to 7.37 which would mark a 50 percent retracement of the July rally, and below there the 100-day moving average near 7.21 would offer the next support. Initial resistance is likely near 8.10.