The petroleum complex traded on both sides of unchanged, attracting scattered support early in the session in response to the lack of progress on Iranian nuclear negotiations. Values then succumbed to selling pressure following the US payrolls report that was sharply above expectations, leading to a strong rally in the dollar and a rise in interest rates on fear the Fed will tighten more than expected. Prices reached a low at 87.01 basis September, where ideas the market was oversold along with fresh concerns over supply tightness helped encourage profit taking and evening up ahead of the weekend.

We have been surprised by the depth of the decline given that crude values have fallen to levels not seen since before the Ukrainian war began in late February. The imposition of sanctions has not led to as deep of a decline in Russian availability as feared as countries that did not adopt sanctions continue to buy Russian oil. Given the potential for a recession along with the impact that higher prices and tighter availability in Europe, the market likely overestimated the extent to which Russian availability would tighten.

Nevertheless, supply availability still appears to be tight and with reserve releases expected to be tempered later this year, the question arises on whether the low inventory situation will buttress prices or will the higher prices that have been apparent lead to a stronger recovery in production, particularly in the US and Canada. A key area to watch on the downside looks to be near 85.00 where we suspect support to emerge as the EU moves to halt imports of Russian crude and products on December 5th, keeping supply availability and an increase in exports from the US on the front burner for valuations despite global recessionary concerns. 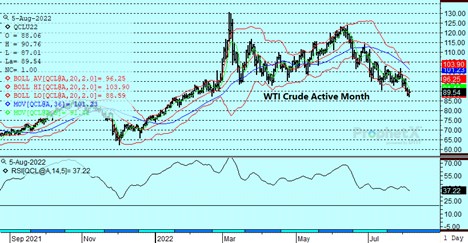 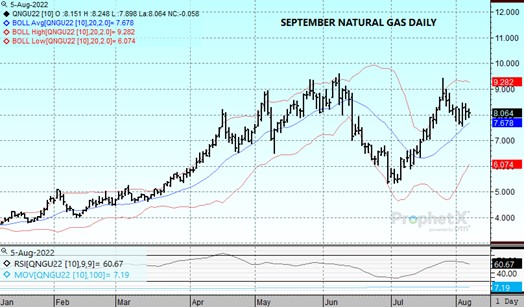 The market has traded sideways since a key reversal was achieved on the charts with Wednesday’s late rally. The strength emanated from a Freeport news wire restating that they were confident the terminal would restart in October, but this time indicating early flows of 2 bcf/d, which would be near levels prior to the fire, and seemed high for partial operations. The buying interest cooled yesterday following the weekly storage report that showed a 41 bcf injection. Trade estimates had been in the 29 bcf area, and the miss quickly took prices down to the day’s lows. Selling momentum could not be maintained as the market found underlying support from the Freeport hopes and current forecasts indicating that August is shaping up to be one of the hottest on record. The last two sessions have seen inside chart action, with the bias leaning to the upside due to the mid-week reversal. The 50 percent retracement of last weeks’ break was achieved Wednesday at 8.50, making that level solid resistance, and if violated 8.70 would be the next target. Initial support arises at the psychological 8-dollar level, and below there at the 20-day moving average near 7.68.

ADM Reports Second Quarter Earnings per Share of $2.18, $2.15 on an Adjusted Basis Net…

Learn more about the July 12 2022 USDA supply/demand report with Steve Freed written and video analysis as well as our USDA Report Infographic.