The petroleum complex traded sharply higher as crude saw gains of over 4 dollars. The products lagged, with some pressure on values noted due to the appearance that refined inventories in Europe have risen to more acceptable levels, with gasoline reportedly offered to the US as disappearance levels weaken on a seasonal basis. The strength to crude appeared to reflect not only selling of the cracks but also nervousness ahead of the OPEC meeting and unrest in Libya.

OPEC+ will meet on September 5th  and has indicated there could be some discussion of production cuts, particularly if Iran reaches a nuclear deal with the West. No news regarding the lifting of sanctions has been indicated, but Iran’s buildup of afloat inventories and preparation to expand production does appear to be challenging other Arab countries control of the market. While OPEC is indicating they might be willing to restrain production, their inability to support values is indicative of other concerns at work. These include the high export levels of the US at a time when Far East demand has been rather tepid. This has forced top exporter Saudi Arabia to consider slashing the OSP for its flagship Arab Light crude by about 4.50 a barrel. Overall premiums are expected to be high for Saudi Light but the move to reduce the premium might be a sign that demand is beginning to flag given trends in interest rates, high price levels, strength to the dollar, and continued availability of Russian barrels.

Talk of OPEC+ output cuts to support prices offered by the Saudi oil minister late Monday has injected caution on the downside with many suggesting that 90.00 might be a key area for Brent. Challenges will remain as competition for OPEC sales to China and India remain intense. The DOE report on Wednesday should shed light on prevailing demand trends, particularly for exports of products and crude. Expectations are for a draw of .6 mb in crude, a decline of .9 and 1.1 mb in gasoline and distillate respectively, and a drop of .5 percent in refinery utilization. Of interest will be the impact of the partial shutdown of BP’s Whiting Refining facility on supplies of gasoline and diesel in the Midwest given that we are approaching harvest.

Today’s move above the 96.00 level basis October WTI has potential to see follow through toward the 100.00 area once again. Whether those values can be sustained will be contingent on the OPEC meeting and the Iranian negotiations. 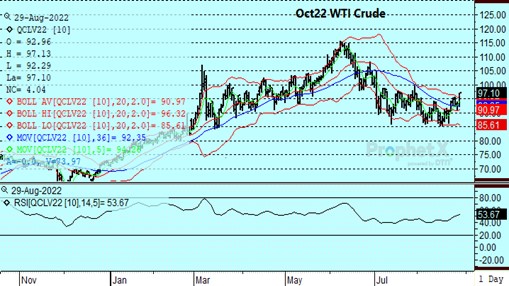 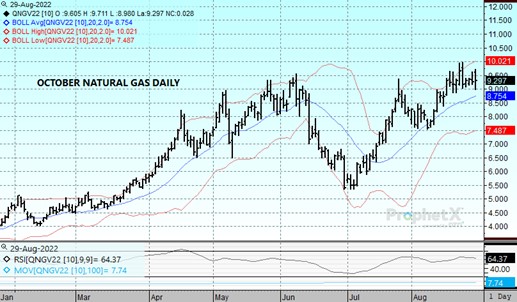 Volatile trade was seen ahead of the September expiration today, with the active October reaching as high as 9.711 overnight before testing down below the 9 dollar level as the day session got underway and finally settling in the middle of the range at 9.336. Warmer revisions to the weather models ignigted the early buying, while improving production to near the 98 bcf/d level attracted selling interest. As we have stated before, with the extreme volatility leading to decreased liquidity, swings of this size will happen with no solid explanation. Concern has started to increase as we near September and the height of hurricane season, which has been quiet thus far but unlikely to remain that way. The market settled below the 9-day moving average for a second straight session which could signal another near-term test of 9 dollars, with trendline support from the July and August lows coming in below there in the 8.90 area.

Any strength will find little resistance before the 9.65 area, with 10 dollars the obvious target of any knee-jerk reaction to early hurricane threats into the Gulf.