The petroleum complex traded on both sides of unchanged with strength linked to talk of OPEC+ output cuts to support prices offered by the Saudi oil minister late Monday. The strong upside reaction, which carried values to as high as 95.40 basis October, encountered profit taking as economic concerns, dollar strength and the possibility of Iranian crude supply returning to the market offered caution at the higher levels. The product markets continued to show divergent trends as gasoline was weak reflecting unimpressive disappearance levels, while active demand from Europe for middle distillates continued to lend strong support to diesel.

The DOE report offered modest support, but the reaction was muted. It showed commercial crude inventories falling by 3.3 mb despite a draw in the SPR of over 8 mb. Gasoline inventories were unchanged while distillate stocks fell .7 mb. Overall inventories of both crude and products rose by 1.4 mb. Net imports of crude rose by 2 mb/d while exports at 4.2 were below record levels of 5.0 mb/d last week. Refinery utilization was slightly higher at 93.8 percent. Disappearance levels for products slipped from the high pace of last week at 19.3 mb compared to 21.2 mb. Gasoline disappearance fell sharply to 8.4 mb/d compared to 9.4 mb last week and 8.6 last year, while distillate disappearance held steady at 3.9 mb. Net exports of crude and products remained high at 2.6 mb compared to 2.7 last week.

With values hitting the 93-95 range basis October, the recovery might begin to stall and move into a consolidating phase reflecting uncertain economic prospects, particularly in China and the US, offset by low inventory levels and high US exports just as the SPR sales program winds down in October. In the background is uncertainty over OPEC+ statements regarding production cutbacks, along with the EU ban on Russian imports that has been pushed back to February as the Northern Hemisphere winter ends. Of considerable interest will be the Iranian negotiations and whether a deal can be struck. 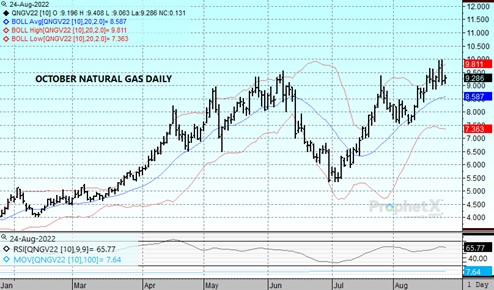 Soon after making a new high yesterday at 9.987 basis October, the market saw a quick turnaround after an announcement from Freeport LNG indicated that their restart would be pushed back to November, with full operations not achieved until March of 23. The ensuing selloff sent prices down to a test of the 9-dollar level. Prices have stabilized since then, with the market gaining back 14 ½ cents today to settle at 9.30. Support was offered by a continued slowing in production, with a drop to near 96 bcf yesterday followed by early nominations today at 95.4. Yesterday’s action saw a key reversal on the charts, with the 9 dollar level offering initial support and below there at last week’s double bottom near 8.86. The failure to settle below the 9-day moving average the last two days is a minor positive with the 9.50 area offering resistance.