The petroleum complex suffered sharp losses before recovering back toward unchanged late in the session. The weakness in crude oil and gasoline was traced to a variety of factors that included dollar strength, slowing fuel demand in China as their economy continues to struggle, and on the appearance Russian barrels are continuing to gain a foothold in China, the world’s largest consumer. In addition, the potential that the 2015 nuclear deal will be revived appeared to weigh on prices. ULSD was immune to the losses and maintained a strong tone throughout the session reflecting shifts from natural gas to middle distillates in Europe.

Recessionary fears continue to be a drag on values as weaker demand would be a result. ULSD was somewhat immune to these concerns as a drop in Russian shipments of natural gas to Europe encourages substitution of other fuels, particularly middle distillates. In addition, the heavy reliance on diesel for powering cars in Europe is encouraging good buying interest ahead of the planned embargo of Russian oil in December.

Rising overseas demand for US crude and products has been a key supporting influence. With net export levels at record highs fed by Russian sanctions and limited European refinery rates due to low water levels along key waterways, US exports are likely to remain near record highs. This will continue to strain US inventory levels and be a source of concern in the absence of any discernible decline in disappearance levels.

Reports that OPEC+ missed their output target by 2.9 mb/d in July, putting their compliance rate at 546 percent compared to 320 percent in June, raised concerns over their ability to meet potential demand, while Saudi comments suggesting they might consider an output cut to support prices also underpinned values late in the day.

Although the Iranian negotiations remain a possible negative, there is potential for values to test the 93-95 level basis September crude. Support might persist given the recent lack of speculative involvement on the long side, and on the extremely low inventory levels and limited refining capacity to satisfy export demand in the US.

The DOE report is expected to show a decline in crude inventories of 1.5 mb, distillates higher by .3 and gasoline down 1.8 mb. Refinery utilization is estimated at 93.5 percent. 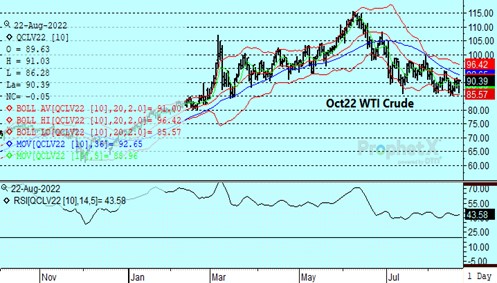 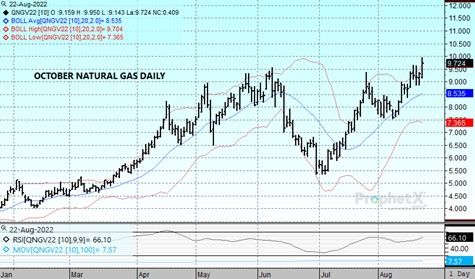 The double top from last week near 9.65 was taken out early this morning, with prices spiking up to 9.95 on the October contract while the winter months all tested above 10 dollars. Volume was again low during the price run as stops were rooted out above 9.65 and again near 9.85. Blame for the strength was placed on European prices that continue to make new highs as Gazprom’s shutting of Nord Stream 1 at the end of the month for questionable maintenance has heightenend concerns over Russia’s intentions regarding gas flows to Europe. US fundamentals were neutral as production held near 97 bcf over the weekend and LNG flows were steady in the 11 bcf area. Forecasts were mixed, with heat in some pockets being offset by expected cooling in the South from storms and heavy rains set to pass over this week. With the October contract failing to breach 10 dollars, that level remains a target near term, with no obvious resistance above there on the chart until you look at a monthly and the 2008 highs near 13.70. Last weeks double bottom at 8.86 could quickly be tested if upside momentum wanes, with 8.50 the next support below there.