The petroleum complex steadied following early losses linked to recessionary concerns and dollar strength, with crude values reaching a low for the move of 85.88 before recovering in response to the DOE report. Adding to early bearishness were reports of expanding export and production levels in July from Saudi Arabia as firmer differentials for Russian crude attracted better buying interest from China and India. Reports that Russian availability has been better than previously expected despite sanctions also appeared to be a bearish influence.

The early losses were quickly erased on the release of the DOE report that showed a large draw in commercial crude inventories of 7.1 mb as crude exports rose to a record high of 5 mb/d and net crude exports reached 1.1 mb/d for the latest reporting week. The sharp increase in exports reflects the attractive differentials for US crude relative to the North Sea which has attracted active demand given the potential for a full embargo of Russian crude by the EU beginning in December. Adding to the bullishness were strong disappearance levels encompassing both domestic use and exports for gasoline which led to a sharp decline in inventories of 4.6 mb/d. In distillate, inventories registered a small build of .8. Disappearance levels were impressive at 21.2 mb compared with 19.5 mb/d last week. It appears that the recent decline in prices might be encouraging modest increases in consumption despite some of the challenges with respect to slowdowns in manufacturing and housing seen recently.

With the market still assessing the economy and what progress will transpire with respect to the Iranian negotiations, we would not be surprised to see a consolidation near current levels and up toward the 93.00-95.00 range basis September. For the most part the market has discounted the bearish news, and recent attempts to discourage India from blending Russian crude in their refinery throughput might raise demand for other crudes and provide support to WTI as export demand remains substantial. 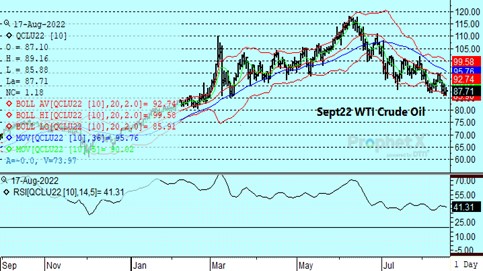 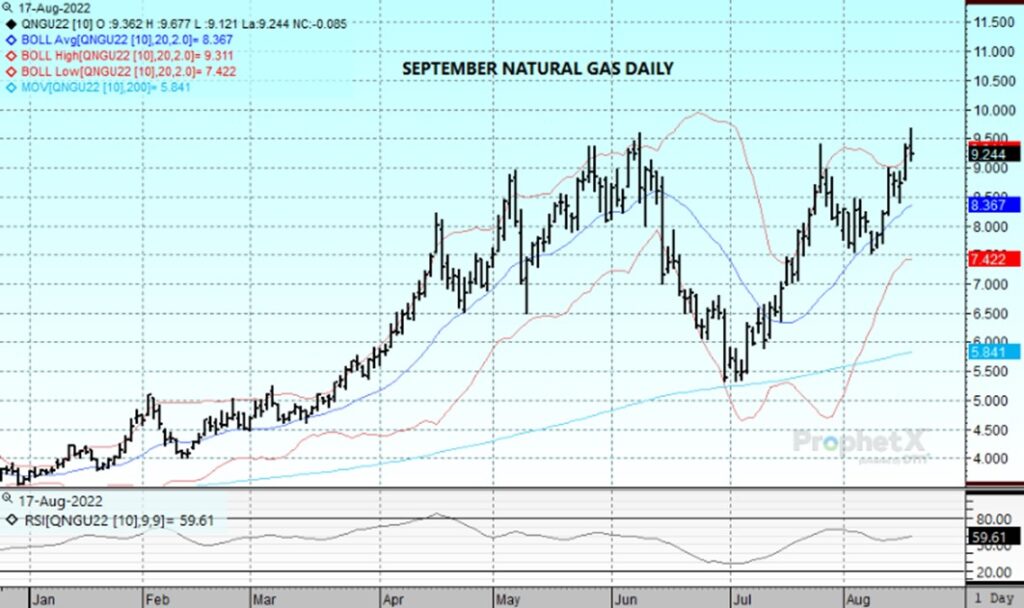 The settlement through 9 dollars and test of the July highs all happened within a single session as  the September contract ended at 9.329 yesterday after pushing up to a peak at 9.411. Follow through this morning saw a new contract high achieved at 9.677 before the session ended with prices lower by 8 1/2 cents at 9.244. Although production has pulled back below 96 bcf the last two days and some sections of the US have seen forecasts warming into the end of the month, the fundamentals again lack enough punch to explain the entire move, as poor liquidity coupled with fund short covering exacerbated price action. Background support was offered by record European prices and the impending return of Freeport LNG. Tomorrow’s storage report is expected to show a 34 bcf injection verses the 5-year average build of 47. The poor close could portend a near term retrenchment that could easily test back to the 9 dollar level, with support below there at 7.86. With a new contract high reached today, the upside is a little more open ended, with 9.75 likely to offer some resistance, but the 10 dollar level is a glaring target for the bulls.