The petroleum complex continues to respond to a variety of influences with the focus today on weakness to the Chinese economy along with the potential for the US and Iran to accept a new nuclear agreement proposed by the EU which would remove sanctions on Iranian oil exports. The weakness took values down over 5 dollars at one point in crude and as much as 14 cents in products before recovering moderately.

In China, economic data indicated the economy had slowed in July further than had been expected as COVID lockdowns and a property crisis cut into growth. The Chinese Central Bank responded by cutting interest rates to counter the declining growth rate, with some Western banks suggesting growth could slow to 4 percent from previous estimates at 4.4 percent, and possibly even lower given the new data. The impact on petroleum has been pronounced with refinery output falling to 12.53 mb/d, its lowest level since March of 2020.

The appearance that the Iranian talks were making progress also weighed on sentiment. Reports that Iran will respond to the final draft text to save the 2015 nuclear deal by midnight Monday appeared to touch off selling interest. Indications that the US was opposed to some unresolved issues that Iran had requested raised questions over how close an agreement actually was. Nevertheless, nervous liquidation was apparent given the uncertainty over the negotiations and scope for additional oil being available to offset current supply tightness. Given the weak close today, we see the potential for a test of the 85.00 area basis September where support should emerge.

The DOE report scheduled for release Wednesday is expected to show crude stocks falling .1 mb while distillate stocks are expected higher by 1.1 mb and gasoline stocks estimated lower by 1.5. Refinery runs are expected lower by .3 to 94 percent. 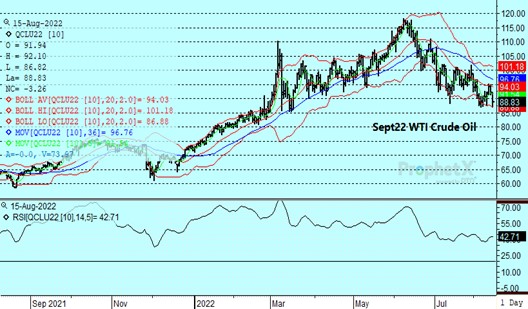 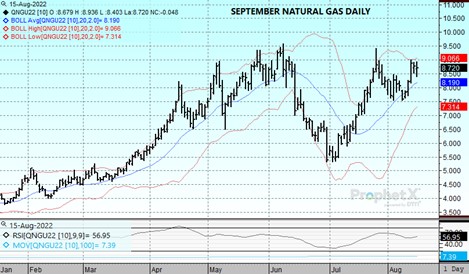 The market recovered from early weakness associated with downward revisions to CDD expectations in the 15-day forecasts as the September contract settled with a loss of 4 cents at 8.728 after trading as low as 8.403 overnight. Volume has been lackluster over the last two sessions with prices contained within last Thursday’s range. Background support was provided by European prices which neared all-time highs as Russia continued to alter export flows to Europe. With overseas demand likely to remain strong and Freeport seemingly on track to return to operation in early October, the market remains well supported on breaks despite the fading heat. The 9-dollar area continues to offer solid resistance, and a settlement through there could lead to a quick test of the July highs above 9.40. Today’s early weakness tested the 8.50 support, and it likely takes a close below that level to push down to a test of the 8.15 area.