The macro influence of the improved CPI and PPI numbers at midweek continued to spillover to the petroleum complex as crude oil tested the 95 level yesterday, while gasoline and heat saw weekly gains of 20 and 30 cents respectively. With the main factor easing inflationary pressures being decreased energy costs, the irony of “lower fuel prices caused fuel prices to rally” is not lost on us.

Yesterday’s move by Shell to close three Gulf of Mexico drilling rigs due to an onshore leak squeezed out the last push to the highs, with an estimated 410 tb/d of total daily production in play. Those gains were given back today as the reaction was overdone and it appeared the leak would be fixed by the end of the day and the facilities would be back in operation.

The market was also trying to digest conflicting estimates from OPEC and the IEA, with the former revising its expected growth in world oil demand lower by 261 tb/d, while the latter increased their estimates by 380 tb/d for 2022 based on increased gas to oil switching for power generation due to high global natural gas prices.

The close above the 9-day moving average keeps the near-term bias up, with 95 the first level of resistance. A settlement below 91.30 could lead to a resumption of the downtrend with support likely down at the 87.40 area. 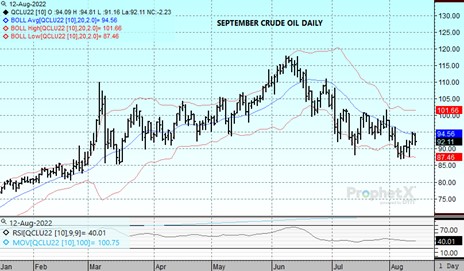 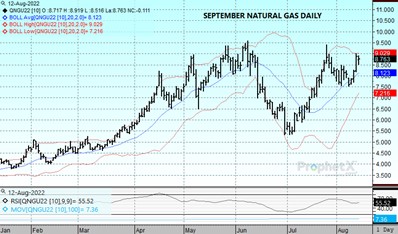 Wednesday’s rally saw good follow-through as the September contract gained 67 cents yesterday before giving some of those gains back today, losing 10.6 cents to end the week at 8.768. The storage report showed a higher-than-expected injection of 44 bcf, but it could only temporarily slow prices as news that Shell had closed 3 Gulf of Mexico drilling rigs due to an onshore leak had an outsized effect on prices. The move from 8.55 to the highs at 8.994 appeared to be a flushing out of stop loss buying from managed funds who remain net short the market. Despite the nature of the gains the market was unwilling to give much back today even as the shutdowns were indicated to be short lived. Underlying support came from continued easing in production levels, a jump in LNG flows as Freeport seems to be doing some ramping, and on signs that solid power burns will be maintained next week as wind generation is expected to ease. 9 dollars is the next obvious resistance level, and a settlement through there could lead to a quick test of the July highs above 9.40. A change of momentum to the downside could see quick losses with minor support at 8.50 and below there near 8.15.