South America Weather Forecast: In Argentina, concern of dryness in the south remains. Some shower and thunderstorm activity will occur Thursday in southern Argentina and this will be important since it will then likely be a while until more meaningful moisture occurs in this part of the nation. Another rain event will still be possible in southern Argentina Dec. 17 – 18; though, this may be erratic and is unlikely to be enough for notable soil moisture improvements.  In Brazil, conditions will be favorable in much of the nation for crop development; though, there will be a few areas that will be left in need of greater rainfall by at least the end of the first week of the outlook.

There were changes in registrations (SRW Wheat down 27; Oats up 6)—

President-elect Joe Biden plans to nominate former Iowa Governor Tom Vilsack for U.S. agriculture secretary, according to two sources familiar with the decision, a choice that will reassure farmers but disappoint climate and nutrition activists.

Vilsack, who led the U.S. Department of Agriculture (USDA) under then-President Barack Obama, has a long relationship with Biden and served as a trusted adviser on rural issues during the Democratic former vice president’s campaign.

U.S. farmers will likely see a familiar face at the helm of the Department of Agriculture come January, but the lofty government assistance programs they have gotten used to could be a thing of the past under a Joe Biden-led administration. 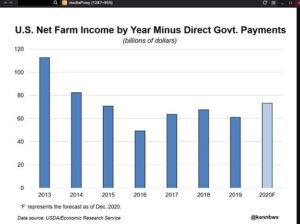 Argentine grains inspectors and oilseed workers started a new wage strike on Wednesday, organizers said in a joint statement, as stalling contract negotiations threatened to interrupt exports from one of the world’s main bread baskets.