Malaysian palm oil prices were up 34 ringgit at 2,563 (basis October) at midsession, near 5 month highs, on lower output concerns.

Last evening’s GFS model run was notably drier in the eastern half of the Corn Belt July 25 – 27; the decrease was due to this evening’s run being too aggressive with a large ridge of high pressure shown to spread over much of the region.

Another notable change was the decrease of rainfall in the southern half of the Corn Belt July 28 – 30 and across the southeastern states as well.

The 11 to 16 day forecast has models back in agreement with a well defined ridge sitting over the Midwest bringing hot and dry weather.

China said it hopes the Phase 1 trade deal it reached with the United States can still be implemented and reiterated its willingness to stick to the agreement despite recent U.S. sanctions against Chinese officials and firms; Chinese foreign ministry spokeswoman Hua Chunying said that some in the United States were always oppressing and bullying China and said Beijing must act to reject and respond to such practices.

U.S. soybean crushings declined for a third straight month in June, but the 1.4% drop was smaller than expected and the total amount was the largest June crush on record; NOPA said its members, which handle about 95 percent of all soybeans crushed in the United States, processed 167.263 million bushels of soybeans last month, down from 169.584 million bushels in May but up from the 148.843 million bushels crushed in June 2019; analysts, on average, had been expecting a crush of 162.168 million bushels 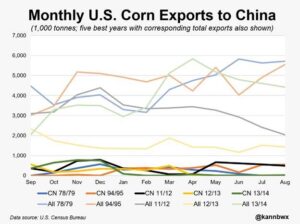 The new marketing year is still a month-and-a-half away, but the amount of new-crop U.S. corn that has already been sold to China would make those 2020-21 exports the second-largest on record if the full volume is shipped; the Phase 1 trade deal between Washington and Beijing essentially requires record exports of corn and other U.S. agricultural goods to China, something very much on the radar for corn with the way sales are going.

The wholesale prices of China’s agricultural products edged down Thursday, according to the Ministry of Agriculture and Rural Affairs; the latest China agricultural product wholesale price index came in at 116.04, down 0.04 points from Wednesday; by 2 p.m. Thursday, the average wholesale price of pork, a staple meat in China, stayed relatively unchanged at 48.82 yuan (about 6.98 U.S. dollars) per kg, while eggs shed 0.9 percent to 6.57 yuan per kg; the average wholesale price of 28 key types of vegetables tracked by the government was up 1.7 percent from Wednesday, while six different types of fruits saw average price up by 2 percent.

Brazilian pork and chicken exports are projected to increase in 2020 as local meat producers have continued to operate virtually at a normal pace during the COVID-19 pandemic; pork exports can grow by as much as 33% to up to 1 million tons this year while chicken exports are increasing by up to 5% to 4.450 million tons, as demand from China remains strong.

A mild La Nina weather event is likely to hit Argentina in the final stretch of its wheat growing season, meteorologists said, extending a dry spell that has affected planting; a big part of Argentina’s wheat belt is already dryer than usual, with about 87% of the country’s 2020/21 crop having been planted so far and harvesting expected to start in December.

Argentina does not plan to increase grains export taxes despite the government’s need for revenue as the coronavirus pushes the country into a deep recession this year, the Agriculture Minister said; farmers in the vast Pampas grains belt had worried that the cash-strapped government, embroiled in a complicated restructuring of $65 billion in sovereign bonds, might raise taxes on international shipments of wheat, corn and soy.

Germany’s 2020 soft wheat production is set to fall by 6% compared with last year to 21.6 million tons, dented by a sharp drop in sowing during a wet autumn, consultancy Agritel forecasted; the decline in winter wheat sowing last autumn was expected to outweigh a slight increase in average yield; that decline also outweighed an increase in area for Germany’s much smaller spring wheat production.

Dutch nutrition company Royal DSM and French agri-food group Avril said they would start production of rapeseed (canola)-based protein for the food industry as of 2022 as they aim to benefit from the booming plant-protein market.

India’s soybean production is set to jump by at least 15% in 2020 from a year earlier as farmers are increasing the oilseed’s acreage due to timely arrival of monsoon rains and as New Delhi raised the minimum buying price; increased production of India’s main summer-sown oilseed could help the world’s biggest vegetable oil importer trim costly purchases of palm oil, soyoil and sunflower oil from Indonesia, Malaysia, Argentina and Ukraine; it could also revive Indian exports of animal feed ingredient soymeal to places such as Bangladesh, Japan, Vietnam and Iran.

Problem With Beef is Low Exports