Overnight trade has SRW up roughly 1 cent, HRW up 2; HRS Wheat up 1, Corn is unchanged; Soybeans down 2, Soymeal unchanged, and Soyoil down 25 points.

Chinese Ag futures (January) settled up 19 yuan in soybeans, down 26 in Corn, unchanged in Soymeal, up 46 in Soyoil, and up 72 in Palm Oil.

Conditions will continue to be mostly good for summer crops in the U.S.; though, there will also still be pockets of net drying and rising crop stress. Heat in the southeastern states will cause some dryness to re-emerge through Monday in areas that miss out from the erratically distributed thunderstorm activity. A timely increase of rain will then occur later next week. Some worsening and expansion of dryness will occur in the Hard Red Winter Wheat Region; the western half of the Northern Plains will continue to be notably dry.

Last evening’s GFS model run was drier across much of Iowa Wednesday and removed most of the rain from an event the midday GFS model run had suggested.; the midday European model run was most aggressive with rainfall for Iowa in the first week of the outlook. Temps are seen running close to average for the next 7 to 10 days for the Midwest.

The 11 to 16 day forecast for the Midwest has both models indicating average to a bit below average rainfall and average temps.

The Southern U.S. Plains in the 6 to 10 day forecast is has light to moderate rains for eastern sections of the region and light rains in the rest of the region. Temps trend towards above average for next week.

The U.S. Delta has limited rainfall over the next 6 to 10 days.

There were changes in registrations (Soyoil down 63)—

For the week ended July 30th, U.S. All Wheat sales are running 9% ahead of a year ago, shipments up 9% with the USDA forecasting a 2% decline on the year

For the week ended July 30th, U.S. Corn sales are running 12% behind a year ago, shipments 17% behind with the USDA forecasting a 14% decline.

For the week ended July 30th, U.S. Soybean sales are running 4% behind a year ago, shipments down 4% with the USDA forecasting a 6% decline on the year

Wire story was commenting corn prices look set to rise over the next few weeks as extreme weather and agricultural pests put a dent in the harvest of the world’s two largest producers of the grain; corn price reaches $3.80 plus or minus 20 cents in the fall; in other words, corn prices could easily reach $4 a bushel, or about 24% higher than recent prices of around $3.22; traders wanting to profit from the likely surge in prices should consider purchasing December-dated corn futures; alternatively, investors can try the Teucrium Corn Fund exchange-traded fund (CORN), which holds a basket of corn futures.

A top U.S. biofuel industry trade group said it has cut lobbying spending as the coronavirus pandemic has slammed members eager to press demands with President Donald Trump, who hopes to win the corn-producing state Iowa in November; reduced clout could complicate the industry’s efforts to secure changes to U.S. biofuel policy that producers say would shore up demand for corn-based ethanol, but which face strong opposition from oil refiners.

The ethanol industry continues to wait for a decision from EPA on 86 pending small-refinery exemptions after the U.S. Department of Energy finished a review and sent those requests back to EPA; during a news conference on Thursday, the Renewable Fuels Association President and CEO said the small-refinery exemption program needs to be transparent.

More U.S. farmers are filing for bankruptcy, as federal payments projected to reach record levels this year fall short of compensating for the coronavirus pandemic and a year’s long slump in the agricultural economy; about 580 farmers filed for chapter 12 bankruptcy protection in the 12-month period ended June 30, according to federal data; that was 8% more than a year earlier, though bankruptcies slowed slightly in the first half of 2020 partly because of an infusion of federal aid and hurdles to filing during the pandemic.

Harvest operations have just started in some parts of the province; there have been reports of farmers desiccating pulse crops, with more planning to within the next week or two; warm weather this week has continued to help crops progress throughout the province, with most farmers estimating their crops are at their normal development stage.

China’s soybean imports rose 18% this year through July versus a year ago, as large volumes of soybeans bought cheaply from top supplier Brazil arrived in the country, according to data from the General Administration of Customs; China brought in 10.09 million tons of beans last month, up from 8.63 million tons in July 2019 but below June’s record 11.16 million tons, the customs data showed

China imported 956,000 tons of vegetable oils in July, down 6.1% from the previous month 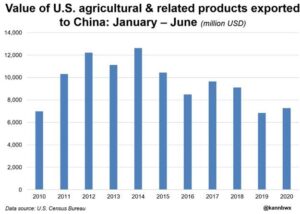 U.S. soybean sales to China for the upcoming marketing year sit at a six-year high after last month’s blistering sales pace; however, the oilseed occupied an unusually light share of total American farm exports to China during the first half of 2020, which explains why the Asian country is seemingly very far behind on fulfilling promises made in the Phase 1 trade agreement; between January and June, the United States had shipped $7.3 billion worth of agricultural and related products to China, according to data published on Wednesday by the U.S. Census Bureau; that is up 6% from the first half of last year, which was an 11-year low, but is down 25% from 2017, the benchmark outlined in Phase 1; that trade deal, signed in January, suggested China in calendar year 2020 would purchase and import at least $36.5 billion worth of U.S. farm goods, some 50% more than in 2017.

Brazilian millers could diversify their wheat imports next year and buy from Lithuania now that Brazil’s government has authorized this supply alternative; the first such purchases are not expected until 2021 due to bureaucratic hurdles.

The drought that has hammered parts of Argentina’s farm belt since June continued putting downward pressure on recently planted wheat crops over the last week, the Buenos Aires Grains Exchange said in its weekly report

The dry weather has already prompted the exchange to cut its wheat planting area estimate to 6.5 million hectares from a forecast of 6.8 million hectares at the start of the season; the poor weather has made it unlikely that the 2020/21 harvest will hit the 21 million tons initially estimated by the exchange; Argentine farmers had sown 98.3% of the season’s expected wheat area as of Wednesday; wheat harvesting in Argentina starts in November and ends in January

The country’s 2019/20 corn harvest ended over the previous week, the report said, at an estimated 50 million tons

Ukrainian ProAgro consultancy revised up its domestic 2020 grain harvest forecast on Thursday to an all-time high of 76.15 million tons from the previous estimate of 74.23 million; ProAgro said it had increased its 2020 wheat harvest outlook to 26.59 million tons from 26.07 million and corn to 38.86 million tons from 38.49 million.

Euronext wheat futures ended little changed on Thursday, holding near a one-month low as traders weighed rising expectations for global supplies against a poor French harvest; front-month September milling wheat settled unchanged on the day at 179.25 euros ($212.84) a ton, after earlier touching a new low since end-June at 178.75 euros.