Overnight trade has SRW Wheat down roughly 5 cents, HRW down 5; HRS Wheat down 1, Corn is down 2 cents; Soybeans up 1;  Soymeal up $2.00, and Soyoil down 15 points. Chinese Ag futures (January) settled down 2 yuan in soybeans, up 19 in Corn, down 10 in Soymeal, down 10 in Soyoil, and up 8 in Palm Oil. Malaysian palm oil prices were down 9 ringgit at 2,994 (basis December) at midsession on position-evening.

U.S. Weather Forecast: The 6 to 10 day forecast for the Midwest has differences with the models again; the GFS has mostly light amounts of rainfall in the northern regions of the Midwest while; the European sees rains for much of the Midwest with snow hitting the northern regions of the growing areas. Temps will be falling to below average. The Southern Plains over the 6 to 10 day period has the models mixed with the GFS showing little to no rainfall while, the European has an increase of precip for the region.

U.S. soybean crushings likely dropped in September to the lowest monthly level in a year, while soyoil stocks fell to a 13-month low, according to analysts polled ahead of a National Oilseed Processors Association (NOPA) report due on Thursday.

Manitoba crop report: Harvest completion sits at 95%, well ahead the three-year average of 79% at this time.

China’s corn futures hit a new record high on Wednesday as investors bet on higher prices for the grain because of crop damage from typhoons this year and due to Beijing’s efforts in years past to whittle down its once-mammoth state reserves; delivery in January hit 2,566 yuan ($380.70) per ton, the highest on record. 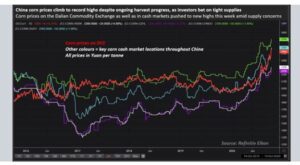 China today expressed its commitment to purchase 1.7 million tons of palm oil from Malaysia until 2023.

Rains that were forecast to blanket a wide portion of Brazil starting on Oct. 10 have arrived in a patchy fashion and will not be sufficient for the nation’s 2020/21 soy planting cycle to advance considerably

Argentina’s Federation of Oilseeds Workers started an open-ended wage strike at 2 p.m. (1700 GMT) on Tuesday, the labor group said, with no sign yet of government intervention that would force members back to work while new contract talks are held.