Malaysian palm oil prices were down 60 ringgit at 3,817 (basis March)

In Brazil, conditions are still expected to be mostly favorable for crop development, with some pockets that are a little drier than preferred in an area from Rio Grande do Sul into Parana and greater dryness in northeastern Bahia.

Rain in Argentina will be more meaningful with greater coverage Sunday through Monday due to a frontal boundary. The rain will be beneficial and needed; though, there will still be some pockets that don’t receive much moisture. The rain may be greatest in northern and west-central Argentina with less than preferred in the south.

Wire story reported Chicago-traded corn and soybeans ended 2020 with a bang and the fireworks have continued into 2021. The unprecedented rally has many traders and analysts cautiously anticipating where prices will head next, and rewinding the clock by a decade might reveal some possibilities. 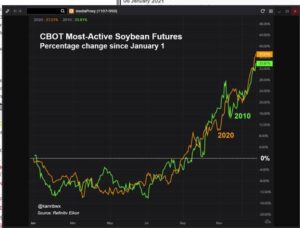 World food prices rose for a seventh consecutive month in December, with all the major categories, barring sugar, posting gains last month, the United Nations food agency said. The Food and Agriculture Organization’s food price index, which measures monthly changes for a basket of cereals, oilseeds, dairy products, meat and sugar, averaged 107.5 points last month versus 105.2 in November. The November figure was previously given as 105.0. For the whole of 2020, the benchmark index averaged 97.9 points, a three-year high and a 3.1% increase from 2019. It was still down more than 25% from its historical peak in 2011. Vegetable oil prices continued recent strong gains, jumping 4.7% month-on-month in December after surging more than 14.0% in November. For the whole of 2020, the index was up 19.1% on 2019.

The union representing Argentine port-side grain inspectors will meet on Wednesday with agro-export companies to try to clinch a wage deal that would end a strike that started on Dec. 9, a union representative said. The month-old work stoppage by the labor group, known by its Spanish acronym Urgara, has hit port operations in one of the world’s top exporters of soybeans, corn and wheat.

Ukrainian sunflower oil export asking prices added $75-$85 per tonne over the past few days, jumping to as much as $1,315 per tonne FOB Black Sea, analyst APK-Inform said ; the move is caused by both an increase in the cost of production…and a significant increase in quotations of vegetable oils and oil on international markets; it said that soybean purchase prices also increased by $10 – $15 and reached $485 – $545 per tonne CPT (carriage paid for) Black Sea as of January 6. APK-Inform said this week sunoil export prices for January-February delivery had risen by 9% since early December, buoyed by stable demand from exporters and stood at $1,210 – $1,220 FOB Black Sea as of January 4. The consultancy has increased its forecast for Ukraine’s sunoil production and exports for the 2020/21 season to 6.219 million tonnes and 5.780 million tonnes respectively.

Euronext wheat eased on Wednesday, consolidating after a fresh two-year high, as U.S. futures turned lower and traders waited to see how a grain rally fuelled by South American supply risks would affect export demand. March milling wheat settled down 1.75 euros, or 0.8%, at 216.00 euros ($265.59) a tonne. It had earlier reached 219.00 euros, a new life of contract peak and the highest spot price since August 2018.

Shares of India’s biggest poultry producer Venky’s dropped more than 4% on Thursday to their lowest level in two months after an outbreak of avian influenza was reported in four states.