Malaysian palm oil prices were up 42 ringgit at 3,452 (basis February) on reports of supply distributions in Malaysia and Indonesia.

South America Weather Forecast: Brazil weather is favorable since rain will fall at one time or another in all of the nation over the next two weeks. Argentina crops would be favorable if rain falls later this week as advertised, but it would not be surprising to see some of the precipitation lighter than advertised. Sufficient rain will fall in northern Argentina to maintain a very good environment for crop development after some welcome rain fell during this past weekend.  The absence of excessive heat will help crops cope with the drier days, but temperatures will still be warm enough to keep evaporation rates high. 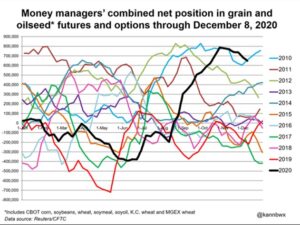 Speculators’ optimistic views of Chicago-traded corn and soybeans remain at historically high levels despite continued light selling last week, and although the wheat bulls had recently gone dormant, they have likely burst back onto the scene over Russian supply concerns.

The U.S. soybean crush in November was likely down from an all-time high in October, although the daily processing pace remained near the highest on record, according to analysts polled ahead of a National Oilseed Processors Association (NOPA) report due on Tuesday.

The monthly NOPA report is scheduled for release at 11 a.m. CST (1700 GMT) on Tuesday. The organization releases crush data on the 15th of each month, or the next business day.

China’s major food-producing province of Henan saw its grain output rose 1.9 percent year on year to reach 68.26 million tonnes this year, according to the Henan Survey Organization with the National Bureau of Statistics. Major grain products, including wheat, corn and rice, have all achieved an increase in yield. Henan has sustained bumper harvest for four consecutive years, with the annual grain output surpassing 65 million tonnes in each of the four year. This year’s record output has been achieved with an increase in the province’s grain cultivation area by 4,253 hectares from the previous year and higher per-unit yield, generating an average output of 6,356 kg per hectare, up 118.5 kg from that in 2019.

Brazil’s tariff-free ethanol import quota with the United States will end on Monday as talks between the two countries on opening up their ethanol and sugar markets have broken down. This means tariffs on U.S. ethanol imports will go back to 20%, the rate imposed by Mercosur on imports from outside the bloc

Argentine grains inspectors and oilseed workers said on Saturday they would extend their wage strike, even as the CIARA-CEC chamber of export companies urged unions to return to the negotiating table.

Russia plans to impose a wheat export tax of 25 euros ($30.4) a tonne between Feb. 15 and June 30, economy minister Maxim Reshetnikov told a government meeting on Monday. The wheat export tax will be in addition to a grain export quota of 17.5 million tonnes to be imposed in the same period to stabilize domestic food prices,

Russia’s December exports of wheat, barley and maize (corn) are estimated at 3.9 million tonnes, down from 4.7 million tonnes in November, the SovEcon agriculture consultancy said.

Ukrainian wheat export prices remained unchanged over the past week due to a slight decrease in demand from key importers, analyst APK-Inform said; Ukrainian 12.5% protein wheat traded at $252-$256 per tonne FOB Black Sea at the end of past week. For the lower-quality 11.5% protein wheat, prices were between $251 and $255 a tonne. Ukraine plans to export 17.5 million tonnes in the 2020/21 July-June season. Corn export prices decreased by $4 a tonne to $226-$230 FOB, APK-Inform said.

Euronext wheat hit a two-week high after a Reuters report that Russia is considering an export tax raised expectations of reduced supply from the world’s biggest wheat exporter. March milling wheat settled up 5.75 euros, or 2.8%, at 210.50 euros ($254.92) a tonne, after reaching its highest since Nov. 27 at 211.25 euros in late trading on Friday. Over the week, the contract added 4.2%, having rebounded sharply from Monday’s two-month low of 199.00 euros.