What a week in the petroleum complex. Prices initially fell sharply from Monday into Tuesday, reaching a low of 65.01 before recovering fully and testing last Friday’s highs near 72.00.   A variety of reasons accounted for the decline early in the week, including a sharp drop in equity values Monday that reflected fears that the rising transmission rates for the Delta variant would dramatically impact global economic growth rates and likewise petroleum demand, particularly in unvaccinated areas of the developing world.  Despite the concern, the lower levels attracted good buying interest on the perception of supplies falling short of demand as the year progresses, even though OPEC will gradually increase production levels into the end of the year. In addition, the ability of OPEC+ to come to a compromise going forward into 2022 implied the group remained in control of production levels for the foreseeable future. 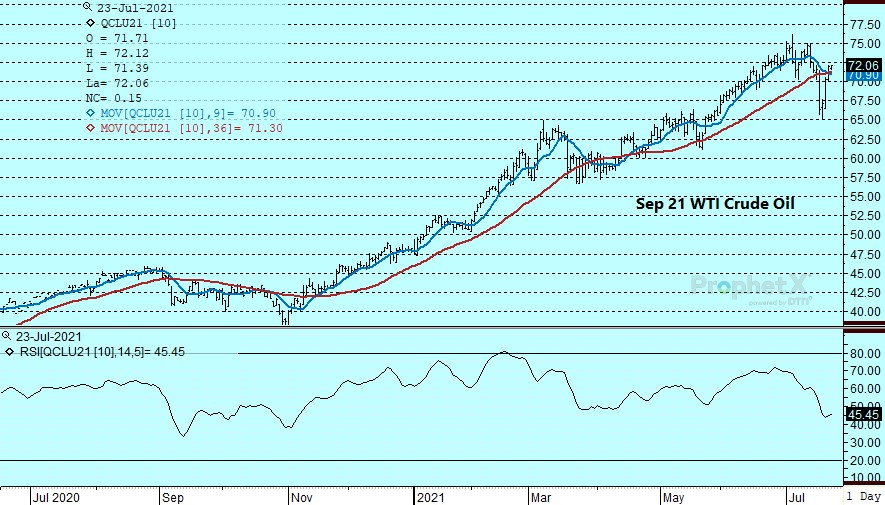 Being sensitive to sharply higher prices and their impact on the global economy from both a global supply/demand and inflationary perspective, OPEC+ may well be content to maintain a stable price environment bounded by the 70.00 to 77.00 range until a clearer fundamental picture emerges. Stock levels (see above), remain in acceptable ranges for forward cover in the US, and while other areas are higher, they have been coming down.  Import levels in China and India will be a key market determinant as well along with mobility trends. 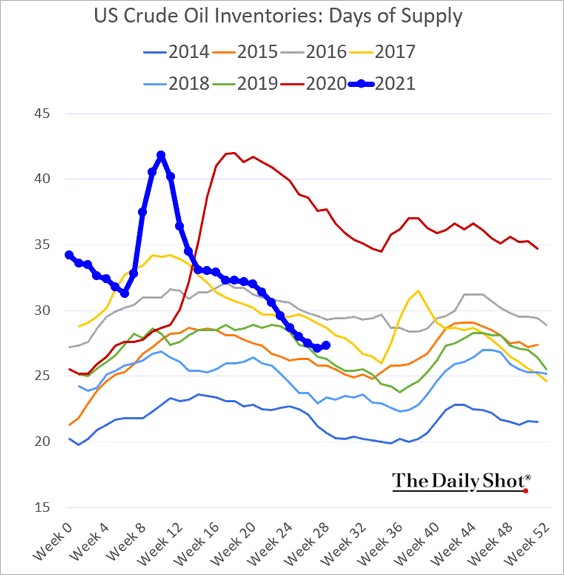 The rally continues in the natural gas, despite being briefly slowed when the weekly storage report showed a build that was above estimates.  The 49 bcf injection compared to expectations at 44 and a 5 year average of 36.  Prices quickly traded down to test the days lows but then never looked back, ending yesterday’s session higher and following up today with a breach of the 4.00 level as the September contract settled at 4.042.  The recipe remains the same, as demand from above normal temperatures expected into the first week of August coupled with solid LNG and Mexican exports offsets against production that has not recovered as quickly as expected.  End of season storage estimates now stand in the 3.5 tcf range, which doesn’t leave much leeway if a cold winter develops to battle for supplies.  With the 4.00 level achieved and RSI stretching beyond 80 percent the last two sessions, a pullback looks likely next week if temperatures don’t increase further.  The old highs near 3.80 should offer initial support. 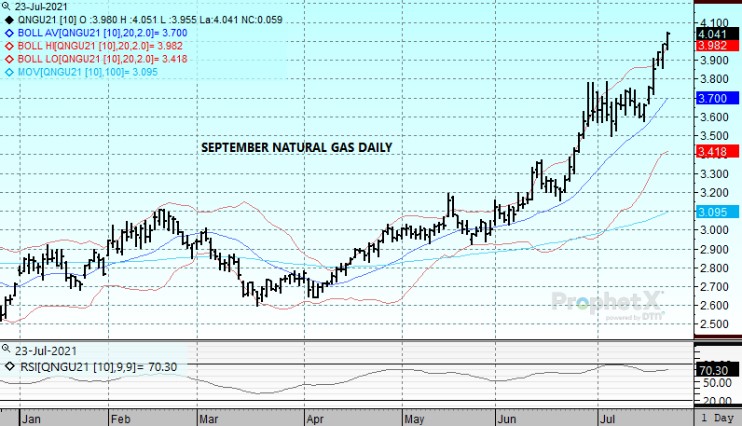 The authors of this piece do currently maintain positions in the commodities mentioned within this report.

Learn more about the September 10 USDA supply/demand report with Steve Freed’s written and video analysis as well as our USDA Report Infographic.