The petroleum complex continues to trade in a volatile fashion with values recovering strongly from lows of 81.50 reached yesterday in October crude. The recent decline, which has seen values drop by 15 dollars per barrel over the past two weeks, reflects the pull of two opposing forces. On the negative side are strong recessionary pressures which have been characterized by fears that Chinese oil consumption may decline for the first time since 2002. With the holidays approaching and travel likely to be restricted by the threat of lockdowns, a quick recovery is not likely. In addition, the odds of a recession in Europe have increased as the halting of natural gas shipments through the Nord Stream Pipeline is forcing adjustment in overall consumption levels throughout the European economic system. Efforts are being made to attract investment in new production on the belief that Russia will be removed as a supplier given the political fallout from the war in Ukraine. In the background are reports the US is considering additional SPR releases after the program ends in October.

On the bullish side is the potential for a price cap, which will further restrict availability from Russia, along with the heightened political tension in Iraq and Libya, while Nigeria has their own challenges. The Iranian negotiations also appear to be at a stalemate. OPEC remains a wild card as they might see a price cap on Russian oil as a threat to their pricing power.

The DOE report yesterday showed a larger than expected build in commercial crude stocks, but it failed to impact the market. Crude inventories rose by 8.8 mb as imports surged to 6.8 mb. Gasoline stocks gained .3 mb while distillates were up .1. Refinery utilization fell to 90.9 percent from 92.7 in the prior week. Net exports continued to pull back, coming in at .7 mb from 2.1 mb last week. 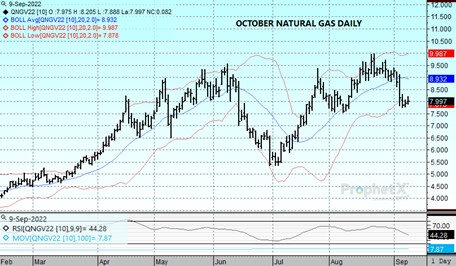 Prices have traded within Wednesday’s range over the last two sessions, with the October contract gaining 8.1 cents today to settle at 7.996. Yesterday’s storage report came in as expected, showing a 54 bcf build. There was some volatility immediately after the number came out, but when all was said and done prices ended near levels seen prior to the release. Concerns have heightened as some storm systems have started to form in the Atlantic, but it is still too soon to accurately predict a path into the gulf. Some of the support seen recently has emanated from poor wind generation, which is running 25 percent below last week’s levels, but with demand expected to decrease into the second half of September and production holding on to recent gains, a further probe of the downside looks likely. A settlement below 7.75 could lead to a quick test of 7.50 with 7 dollars easily reachable based on recent volatility. A settlement above 8.15 is likely necessary to ignite a recovery with resistance beyond there at 8.50.