Recessionary fears pressured values to levels not seen since the Ukrainian war started. The prospect for rising interest rates and a tighter monetary policy sapping economic growth and leading to a recession took values through key support of 85.50 basis October as values fell nearly 5 dollars. The weaker tone developed despite OPEC’s pronouncement on Monday of a cut in the production target of 100 tb/d which had been initially taken in a bullish fashion.

The odds of a recession in Europe have heightened as the halting of natural gas shipments through the Nord Stream Pipeline is forcing adjustment in overall consumption levels throughout the European economic system. Additional pressure on values has emerged over China amid its COVID lockdowns, with crude oil import levels falling as much as 9.4 percent in August. Despite the lower prices. Efforts are being made to attract investment in new production on the belief that Russia will be limited in their longer-range potential given their lack of reliability as a longer-term supplier of crude and petroleum products and the uncertain political situation. A key consideration will be OPEC and whether they will take coordinated action to cut production further in an effort to support values. The threats by Russia to halt oil and gas supplies if a price cap is imposed appeared to fall on deaf ears as it appeared the European Union will proceed with a cap and will attempt to deal with the withdrawal of supplies by rationing and raising imports from other sources including the US. 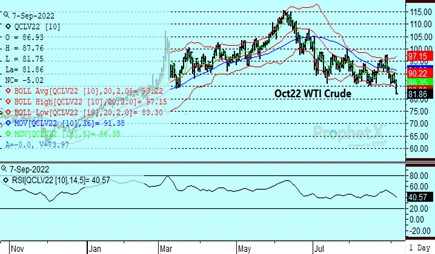 The natural gas market has started the shortened trading week under strong selling pressure, with the October contract losing 64 cents yesterday and following that with a loss of 30 cents today to settle at 7.842. Increased US production against a backdrop of uncertainty created by potential price caps in Europe sparked the selling. US output pushed well above 99 bcf/d for 5 straight sessions prior to today, and actually neared 100 bcf over the holiday weekend. Decreased CDD expectations and poor liquidity helped feed the steep losses. With today’s settlement violating the 100-day moving average, 7.50 is likely to get tested soon. Initial resistance now arises at 8 dollars. Tomorrow’s storage report is estimated to show an injection of 54 bcf compared to the 5-year average build of 65.