The petroleum complex traded lower, as crude oil settled off 1.74 ahead of the weekend, end of the month and quarter, as well as the OPEC+ output decision on October 5th. The appearance that some sectors of the economy are showing stability is offering underlying support despite growing pessimism over economic prospects in Europe, and especially the UK.

OPEC+ consideration of a cut in production targets of .5 to 1 mb/d remain on the table as a potentially supportive influence. We are unconvinced of its effectiveness given that output targets are being undershot by a large amount already. More important might be Russia’s planned annexation of four Ukrainian regions expected today following what looks to be sham elections in those areas. The possibility that additional sanctions might further tighten Russian supply availability could offer support, particularly if other countries not participating in the sanctions such as India begin to move away from their Russian alliances. In addition, the shutdown of the Nord Stream 1 pipeline will encourage additional substitution of oil for natural gas in Europe which could offer support.

Undoubtedly the costs of the invasion are rising for Russia, which could provide an opening for negotiations on a ceasefire that either country might welcome. Whether this would lead to concerted price pressure remains to be seen given the positive impact it might have on the global economy and oil consumption at a time when production remains constrained.

For now, we see the 75-76 level as an intermediate low for the market and an area of stiff support, with potential to move up toward the 86-88 range basis November WTI before better resistance emerges. Key to the outlook will be dollar direction along with interest rates. A stabler tone might remove some of the economic uncertainty that has been weighing on many markets including oil. 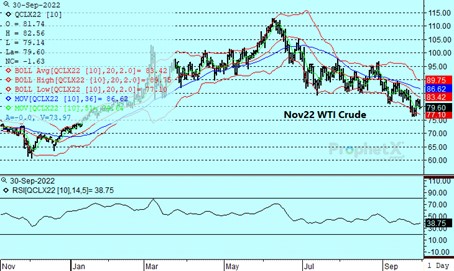 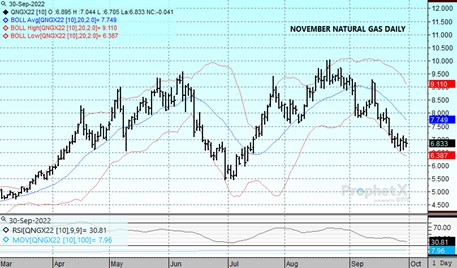 The market struggled to find upside momentum in the wake of another large weekly stock build reported yesterday, with the November losing 11 cents to settle at 6.766. The 103 bcf increase matched last week’s injection and was well above estimates near 94. The landfall of Hurricane Ian, first through Florida and now regrouping to strike South Carolina, has knocked out power to millions and raised the potential for demand loss, which added further pressure on prices. Production has solidly regained the 99 bcf/d level, further pressuring prices as the output gains in September have been the main catalyst for the price pullback over the last month. Underlying support has been offered by LNG flows, which recently surpassed 12 bcf/d despite the continued Freeport outage. Any news regarding the timing of Freeports’ return will likely have an outsized effect on the market. A pushback of the expected return would lead to a quick test of the 6.50 support, with a slide to the 5.70 area possible. Confirmation of the current scheduled return could see prices quickly rebound, with 7.80 as the initial upside target.