The petroleum complex continues to trade in a volatile fashion as early buying carried November WTI up over $2.70 to a high of 86.68 on Putin’s comments suggesting an escalation of the Ukrainian conflict. The push higher could not be maintained as values weakened on dollar strength and ongoing fear that tighter monetary policy will weaken demand prospects more than currently assumed.

The DOE report also attracted selling interest. It showed commercial crude inventories up 1.1 mb, with withdrawals from the SPR totaling 6.9 mb. Gasoline stocks gained 1.6 mb while distillates were up 1.2. Of interest was the sharp increase in refinery utilization to 93.5 percent from 91.5 last week. Total product supplied remained disappointing, with the four-week average off 6.7 percent from year ago levels. The four-week average for gasoline supplied was lower by 7.7 percent while distillates were off 15.7 percent. Export levels were 1.2 mb.

The market continues to be torn between pressure from uncertain demand prospects, while supply availability and low stocks have been supportive. Reports that three Chinese state oil refineries and one privately run mega-refiner are looking to increase runs by up to 10 percent in October might aid overall global availability. The ability of China to buy Russian crude and refine it to supply other areas including Europe might help ease tightness ahead of the Northern Hemisphere winter. Nevertheless, the underproduction of OPEC+ remains a source of concern and the meeting in October might shed light on whether they are intent on supporting values through additional production cuts ahead of the embargo of Russian crude by the EU in December.

The Fed announced a .75% increase in the Fed Funds rate and see it at 4.4 percent by the end of the year, which is up 1 percent from the previous forecast. The move was bullish the dollar and led to an increase in interest rates and rekindled concern over the vulnerability of the domestic economy. The petroleum complex was stable following the announcement showing modest losses in crude while gasoline was moderately higher and ULSD lower. 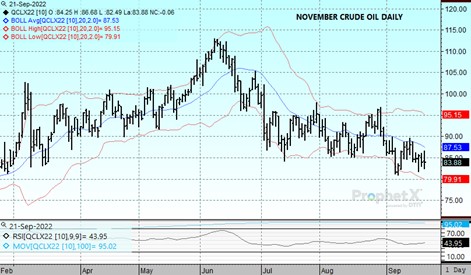 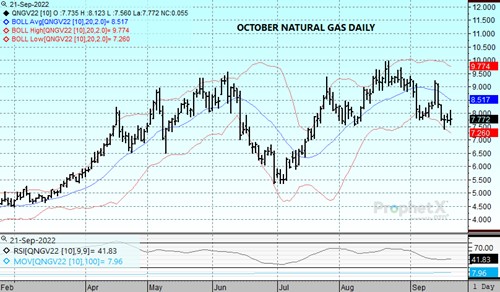 The market traded on both sides of unchanged today and ultimately ended the session at 7.779 basis October for a gain of 6 cents, marking the fourth straight day of settlements within a 6 cent range. Early buying was linked to comments from Vladimir Putin that he would be mobilizing more troops and increasing his commitment to the war, while also alluding to nuclear options with the West. Additional buying emanated from a pullback in production to the 97 bcf/d area due to scattered maintenance. The rally could not be maintained as concerns over near-term heat in Texas gave way to expected easing of weather related demand into the end of the month. Recent injections above expectations also caused concern, with tomorrows’ report expected to show a stock build of 93 bcf compared to the 5-year average at 81. The 7.50 level remains key support on a settlement basis. The 100-day moving average near 7.95 offers initial resistance with a settlement above 8.10 needed to spark a recovery.