The petroleum complex saw concerted selling pressure early in the session as expectations for higher interest rates, a slowing global economy and a firm dollar pushed the November contract to a low of 81.73 before attracting support and settling modestly higher on the day. The buying interest developed in response to a recovery in equity values along with some buying linked to reports that OPEC+ output was 3.6 mb/d below its target in August. OPEC members were 1.4 mb/d under while non-OPEC members were over 2.0 mb/d below their quota. The two biggest laggards were Russia and Nigeria at 1.25 and .700 mb/d below target respectively. Ideas the gap will grow in September provided a basis for the recovery despite reports that Saudi exports in July had reached 7.38 mb/d, their highest levels in over two years, with production at 10.8 mb/d.

Fear of recession remains a headwind as we approach the Fed meeting that ends Wednesday. Higher rates are baked into the outlook, although the strong dollar will also have an impact on global oil demand. China remains a question mark as COVID restrictions appear to be easing, but liquidity risks and a lower level of economic growth continue to be keys to the outlook.  The potential for a modest production cut by OPEC+ at their October meeting, doubts that Iranian sanctions will be lifted soon, and the embargo of Russian crude in December could lead to a tighter situation as forecast in 2023, especially after SPR releases end in October. Nevertheless, demand remains a source of uncertainty and has the potential to undercut rally attempts toward the 88-89.00 level basis November crude.

The DOE report is expected to show crude stocks building by 2.3 mb, distillates down .5 mb and gasoline lower by .9 mb, while refinery utilization is projected higher by .1 to 91,6 percent. 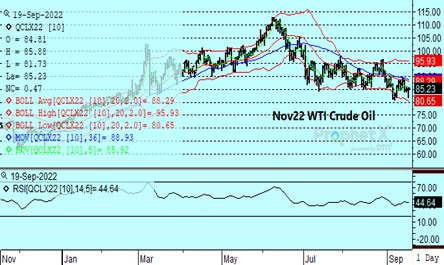 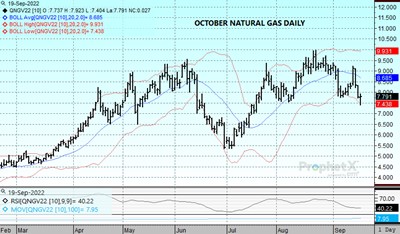 The weakness seen late last week followed through early in the session as the October contract  put in an intraday low at 7.404 this morning. Weather models initiated the selling interest as they took a bearish turn yesterday, with CDD expecatations dropping as much as 19 bcf in demand from the 15-day outlooks. Buying surfaced at the lower levels on the technically oversold nature of the market and some bargain hunting. LNG flows have held steadily above 11 bcf/d for over a week, and also offered support at the lower levels. Despite a mid-session recovery, prices could not hold gains and ended the session near unchanged levels at 7.752 basis October. Tropical Storm Fiona’s turn from a Gulf track late last week, steady production near 99 bcf/d, and growing concern and rumors over the return of Freeport kept the overall tone negative. The test and recovery from 7.50 makes that level key support on a settlement basis. Concern over the rail strike has moved to the background, but any change of opinion on its return could have rapid impications for the market. The 100-day moving average near 7.95 offers initial resistance, but with the 8 to 9 dollar range traversed three times in the last two weeks there likely isn’t much to slow a rally until the 9.10-9.20 area.