The petroleum complex traded slightly higher, shrugging off early weakness linked to outside markets that included lower equities and dollar strength. Fears of recession remained a negative influence given the likelihood of higher interest rates, particularly in the US, along with weakness in the Chinese economy. Comments from the Department of Energy suggesting that it was unlikely that they would quickly refill the SPR also encouraged negative sentiment. Support developed at the lower levels and helped encourage short covering. Potential for a production cut by OPEC+ at their October meeting, a possible stock build as forecast by the IEA, demand challenges due to the recession, sanctions against Iran not likely to be lifted soon, the end of SPR withdrawals in October, and the embargo of Russian oil by the EC in December are all contributing to the market’s volatility.

One cautious note on the long side might be the recent weakness to ULSD. Stocks in the US have been building ahead of winter, reflecting strong margins along with the heavier crude that characterizes the SPR. In addition, margins in Asia are weak reflecting resistance to soaring prices along with the slowing of Asian economies. Reports that the Chinese might ramp up exports of products in the fourth quarter continue to circulate reflecting the availability of discounted Russian crude. 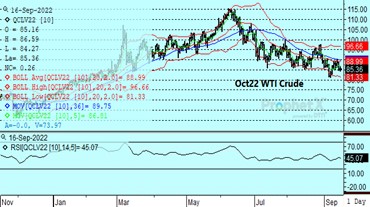 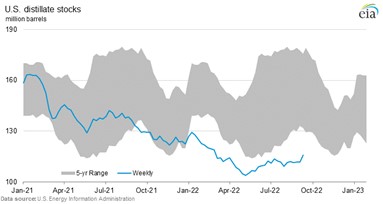 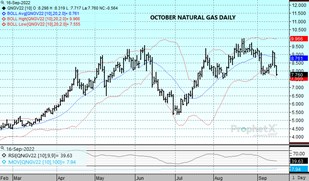 Prices crashed back down to earth yesterday after the US Administration announced a tentative labor deal with rail unions that averted a strike that was to begin today. The weekly storage report added downside pressure as the 77 bcf injection was well above expectations near 71. The result has been a range in excess of 1.50 over the last three sessions as prices ended the day at 7.83 basis October and near last weeks lows. The settlement through the 100-day moving average does not bode well for the near term outlook, with a test of 7.50 likely and if that can’t hold the 7 dollar level would be close behind. since the deal reached yesterday was “tentative” and still needs to be voted on by rank and file members, any signs of problems with the contract could lead to more volatility as the entire upside range has been washed through, with little in the way of resistance until the 9.20-9.30 area.