The petroleum complex continues to recover from the lows reached last week. Early selling on recessionary concerns quickly dissipated and good buying interest emerged reflecting growing fear that an agreement will not be reached regarding the lifting of sanctions on Iran. Comments from France, Britain and Germany suggesting serious doubts about Iran’s intentions to revive a nuclear deal appeared to be a step backward in attempts to restore the 2015 agreement. Iran’s request for a closure of the IAEA investigations into Uranium traces at three sites raised serious doubts over their intentions and commitment to a successful outcome.

This rekindled concerns over supply challenges as the Northern Hemisphere winter approaches. The potential for a price cap and oil embargo by the EU beginning on December 5th will further restrict availability from Russia, necessitating greater reliance on imports from other sources including the US. In addition, heightened political tension in Iraq, Libya, and Nigeria has added to the supply uncertainty.

With values now near a 50 percent recovery of the sharp decline evidenced from August 30th– Sept 8th, the market looks to be at a critical juncture. Values might need further assessment of the supply changes and demand trends in China, as well as economic trends globally to attract follow through to the upside. Key to a more negative outlook is China, where demand has softened toward unexpected levels. Further deterioration would likely undercut the rally potential. Interest rates and the dollar also remain as strong headwinds.

Key to the outlook will be stock levels. Extremely low distillate stocks in the US remain a source of concern and the potential for further SPR releases after October will also be a consideration. The DOE report on Wednesday will be watched closely given the surprise build in crude last week. The report is expected to show a decline in crude inventories of .2 mb, while distillate is expected to gain .6 and gasoline is estimated to be off by .8 mb. Refinery utilization looks to be unchanged at 90.9 percent. 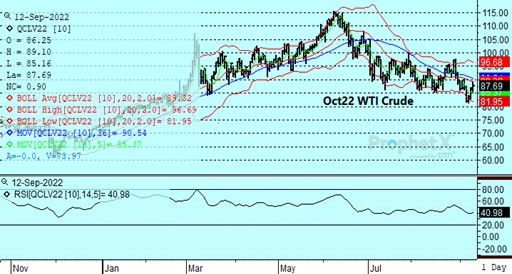 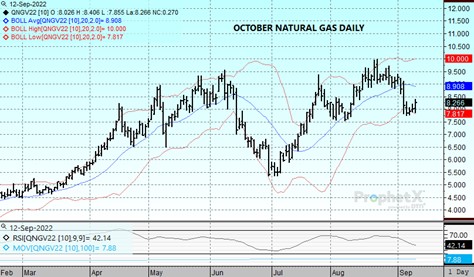 Market action ran counter to most fundamental indicators today as the October gained 25.3 cents to settle at 8.249 after reaching an intraday high at 8.406. Stops in the 8.10 and 8.30 area were rooted out on the way up as evidenced by the spiking action on the short term charts above those levels. Solid LNG flows were the only bullish leaning input as they reached 11.5 bcf/d over the last two sessions as fall maintenance appears to be wrapping up. Production held near the 99 bcf level, and weather revisions continued to shed CDD’s as demand is forecast to ease into the second half of September. Add to that improved wind generation expected this week and explaining the strenght to prices is difficult other than to say it was technically driven. The settlement above 8.15 signals some near term follow through with a test of the 8.50 level likely. The 100-day moving average at 8.88 marks initial support, with settlement below 7.75 opening the potential for a quick test of 7.50 with 7 dollars easily reachable beyond there.