The petroleum complex reacted to the OPEC decision to cut production and rose to a high of 88.42 before attracting scattered selling interest. Despite the announcement we would not be surprised to see further profit taking emerge.

Although the announced production cut of 2 mb/d was double what had been expected, the actual impact could be far softer since OPEC+ had already fallen about 3.6 mb/d short of its output target in August. Due to lower production from Saudi Arabia, Iraq, the UAE and Kuwait, the overall cut might only be between .5 and .8 mb/d. Other producers who are currently below their targets might also offset the cuts by raising their production toward current target levels as some of the supply chain challenges ease and new investment takes place in some areas to take advantage of the higher prices which are still profitable. With demand typically pulling back seasonally into November, supply tightness might not be immediately apparent.

Despite the possibility for disappointed long liquidation as the scope of the actual cuts comes into clearer focus, other forces might begin to impact supply and demand for oil. Chinese demand is likely to pick up as export allocations increases to soften the impact of a reduction in global trade. With discounted Russian crude freely available in that region, profitability of product exports to other areas in Asia might help offset the impact of dollar strength, keeping demand higher than it otherwise would be. 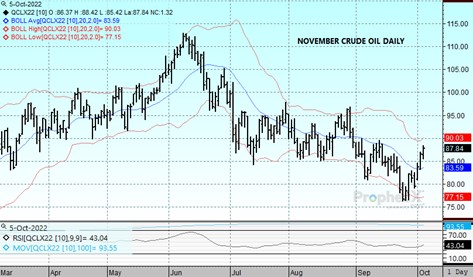 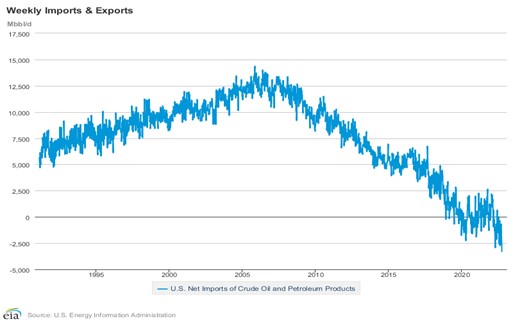 The DOE report continued to highlight precarious stock levels. Commercial crude fell by 1.4 mb despite an additional 6.2 mb coming out of the SPR. More important was the decline in gasoline and distillate inventories, which fell by 4.7 and 3.4 mb respectively. Total products supplied remained high at 20.8 mb compared to 20.0 mb last year. Net exports of crude and products continued to surge, rising to a new record high at 3.3 mb compared to 2.7 last week and net imports of 2.1 last year. The swing to a large exporter has caught the attention of some in US government positions who are of the opinion that the US needs to constrain exports, which is being heartily opposed by the industry and European allies.

The market garnered buying interest over the last two sessions to settle above the 9-day moving average near 6.85, ending today’s session at 6.93 for a gain of 9.3 cents following a spike of over 36 cents yesterday. Macro influences underpinned the move, as an equity rally on signs of an easing in inflationary pressures sparked hope that the Fed would become less hawkish. A dip back under 100 bcf/d in production added some support along with technical buying on the oversold status of the market. The recent drop in LNG flows due to planned maintenance offered resistance. Tomorrow’s storage report is estimated to show a 113 bcf build verses the 5-year average of 87. With the settle through the 9-day, the near-term trend is up, with 7.44 as resistance marking a 38 percent retracement of the break since mid-September. A return to the downside will find initial support near 6.50 and below there at 6.30.