The crude oil market stabilized following volatile movement over the past few days that saw prices recover after a test of support near the 75.00 level basis January. The announcement by the Biden administration and other countries of a release of strategic reserves was taken in stride and in fact helped attract buying into the announcement on the appearance the release would do little to upset the delicate balance between supply and demand, and might in fact harden the resolve of OPEC to support values at the upcoming meeting on December 2nd.  In addition, the recognition that spare capacity is limited to mainly Saudi Arabia, UAE and Iraq, and that OPEC+ is having difficulty hitting goals of 700 tb/d during September and October is problematic for the market if the global economy continues to grow as expected.  Of particular concern is slower than expected capital investment in new oil production, which has been hampered by environmental, social and governance concerns and worries about global warming.  Although the industry’s spare capacity, estimated at 3-4 mb, is providing some buffer to the market, the possibility of it diminishing over time does pose concerns. Whether the US can hike output to help compensate for these shortfalls will need to be watched closely.

The reserve release is unlikely to do much to ease the supply/demand situation.  A colder than normal Northern Hemisphere winter has potential to upset the balance without quicker increases from OPEC+.  Concern might increase if the use of petroleum derivatives in the energy mix to compensate for shortages of other fuels such as natural gas is higher than currently expected outside the US.

Today’s DOE report continued to underlie these concerns.  Although the report showed commercial crude inventories rising by 1.0 mb, the SPR inventories were drawn down by 1.6 mb. In products, gasoline inventories fell .6 and distillate declined by 2.0 mb.  Total inventories of crude and products fell 6 mb and stand at 1,217 mb compared to 1,353 mb last year. Total product supplied remained at 21.8 mb and above 2019 when they reached 21.1 pre-Covid.

The petroleum complex will likely be focused on the resumption of Iranian negotiation of the JCPOA on Monday, November 29th and the reaction of OPEC+ to Strategic Reserve releases at their meeting on December 2nd.  The ability to hold the 75.00 level sets up a potential retest of the 82.00-83.00 range basis January until a more concise reading of demand and OPEC determination on prices is. 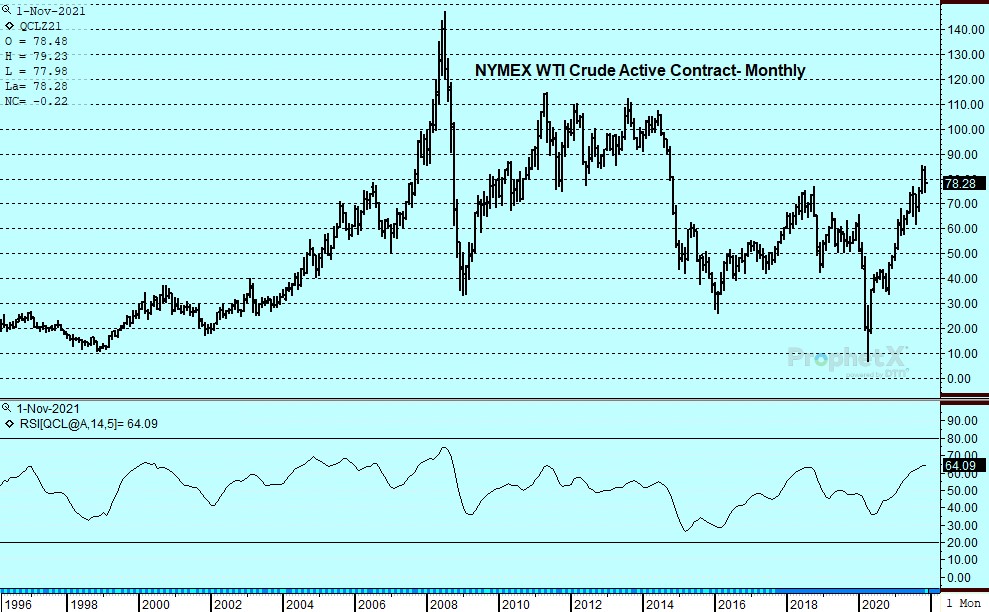 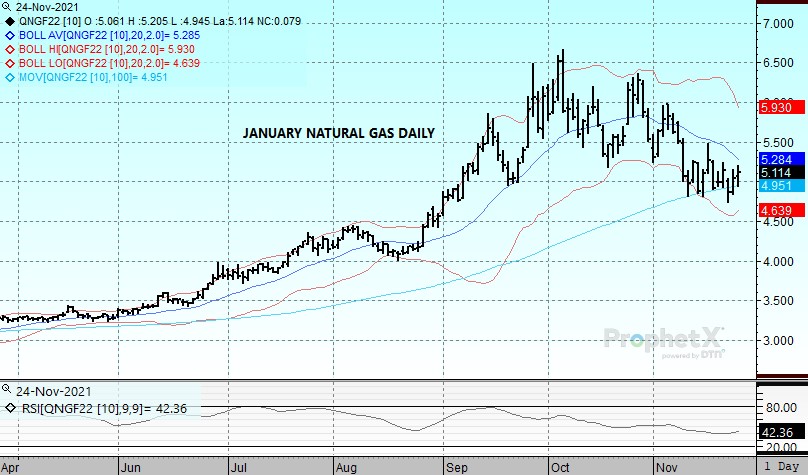 The market recovered from Monday’s sell-off to gain back 17 cents yesterday and another 8 cents today, settling at 5.114 basis the January contract.  Strength to European gas prices offered underlying support as cold temperatures and no signs of increased flows from Russia refocused concerns over winter storage levels that are currently almost 30 percent below normal.  The back and forth of US weather forecasts also offered support as HDD expectations moved higher yesterday and remained unchanged with today’s revisions.  The weekly storage report was released today due to Thanksgiving, and it showed a 21 bcf build, slightly below consensus expectations and well below the 5-year average of 44.  The market reacted to the release by continuing to work higher, as trade appeared to put the mild November behind it and look toward withdrawal season, as early estimates for next week in the 45-70 range are well above the 31 bcf average draw.  The bounce off the 100-day moving average appears to have averted a washout for now.  The 4.95 level emerges as solid support on a pullback, with 5.25 the next target on follow-through to the upside.

Happy Thanksgiving to All!