The petroleum complex continues to trade in a volatile fashion following the sharp price slide earlier this week. The market is torn between demand uncertainty on global recessionary trends and the potential for higher interest rates, while supply concerns tied to Russian sanctions and limited spare capacity persist. Of note recently are questions over Saudi sustainable production capacity, with suggestions that their ability to increase output by more than 1 mb/d over current levels is questionable. Offsetting these concerns has been the reliance on Russian imports by two of the world’s largest consumers, China and India, who have not adopted Western sanctions but instead have increased import levels from Russia at discounted prices. With today’s better than expected jobs report and the recent sharp decline in commodity prices, there are signs that inflation might be easing, making the Fed’s aggressiveness toward tamping down inflation a key variable to monitor.

Of particular interest will be the movement in the cracks for gasoline and diesel relative to crude oil. They have weakened dramatically over the past few weeks as refinery utilization expanded, with the August gas crack falling from a high of 54.00 at the beginning of June to around 40.00, while diesel has seen values move to just above 49.00 per barrel from as high as 75.00 in mid-June. The weakness will go a long way toward tempering the price spikes in energy products and ease some inflationary pressures.

Yesterday’s DOE report helped provide support to the cracks, with refinery utilization falling from 95 to 94.5 percent. The report also showed a large build in crude inventories of 8.2 mb with 5.8 mb coming from the SPR. The lower refinery utilization and higher demand ahead of the July 4th holiday led to a decline in distillate stocks of 1.3 mb and 2.5 in gasoline following recent increases. 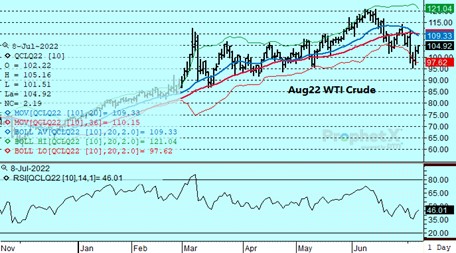 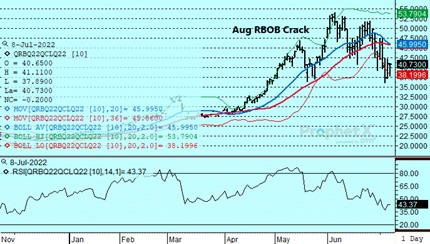 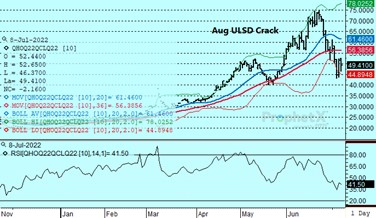 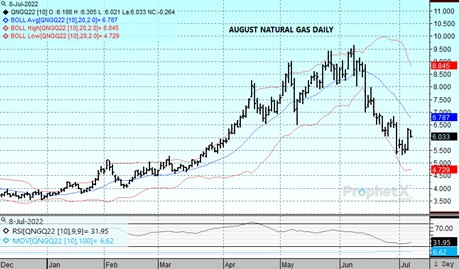 The natural gas roller coaster continues to lose riders as wild price swings make it difficult to trade. After two weeks of storage builds coming in above expectations, yesterday’s 60 bcf injection was well below estimates and lead to a recovery of over 80 cents as trade appeared to be expecting another high side miss. Prices slipped today with low volume and a tight range as some of yesterday’s overextension was given back. The August lost 26.3 cents to end the week at 6.034. Slightly lower overall CDD revisions this morning added to the weak tone, although regional extremes have been a supportive underlying influence, with high temperatures in Texas coupled with decreased wind generation expected to force record gas burns over the weekend. The move back above 6 dollars has turned it into initial support, with trade below there not finding much in the way until the lows near 5.35. Upside follow through finds resistance at the 100-day moving average near 6.60.