The petroleum complex has seen sharp losses since our last report on Friday. Crude, which reached as high as 111.41 during shortened holiday trade on Monday, made a low of 95.10 today, while products have seen losses of as much as 50 cents, or over 12 percent, during the same time period. The weakness reflects rising concerns over recessionary trends in the global economy, dollar strength, and reports of COVID outbreaks in China that could delay their recovery. In addition, the high prices have restrained demand. We also suspect that China’s record imports of Russian oil in June, which has squeezed out other OPEC countries, might provide additional encouragement for the Saudis to expand production more than planned as the meeting with Biden approaches at mid-month. Nevertheless, the scope of the decline has far exceeded our expectations and likely reflects forced long liquidation on the part of speculative interests along with selling tied to the substantial weakness in natural gas and equities that has been apparent in the US.

Although values might continue to drift lower to test the 93.00 area, we are doubtful that the supply/demand situation will weaken to the degree that such a valuation suggests. Instead, look for a base of support to develop in the 93-95 range basis prompt crude as the market assesses trends in interest rates and the dollar and the impact it might have on the domestic and global economy. In the background remains the West’s negotiations with Iran for a new nuclear agreement. Iran said on Wednesday it seeks a lasting nuclear deal following talks with Qatar to revive a 2015 nuclear pact. Still obstacles remain that include assurances the US will not quit the pact again and the IAEA dropping its claims about Iran’s nuclear work.

The DOE report due for release tomorrow, is expected to show crude inventories declining 1.1 mb, distillates gaining .8 and gasoline lower by 1.6 mb. Refinery utilization is expected higher by .2 at 95.2 percent. 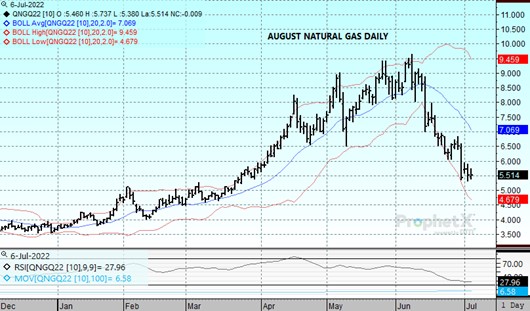 The market has traded in a tight range since last Thursday’s selloff, with the August contract ending 1.3 cents lower today at 5.51. The weakness seen over the last two sessions was linked to the wholesale selloff across the commodity sector on recession fears. Improved production added to the downside bias as US output topped 96 bcf for five straight days over the holiday weekend before pulling back to the 95 area this morning. These improvements were partially offset by increased LNG flows, which have held above 11 bcf/d since the end of June. Weather remains a supportive influence as well, with warmer revisions to the 15-day forecasts likely continuing the impressive rate of gas burns we have seen over the last month. None of these supportive factors will be able to hold up this market if tomorrow’s storage report shows another miss like the last two weeks. Expectations are for a build of 70 bcf compared to the 5-year average increase of 60. A larger than expected injection could quickly test the recent lows near 5.35 with a push to the 5-dollar level likely. On the upside the 6-dollar level remains the target of any recovery in prices.