The petroleum complex continued to attract good buying interest with crude values gaining over $5.00 per barrel and settling above the 102.00 level today basis Aug WTI. The strength appeared to be linked to not only supply concerns with respect to oil but also on growing fears that nat gas supplies to Europe might be shut off following the declaration of force majeure to one major customer of Gasprom and reports other customers in Europe had been informed that because of extraordinary circumstance supposedly linked to seasonal maintenance on the Nord Stream 1 pipeline, supplies could not be guaranteed. The reports helped spur renewed interest in oil supplies as a possible alternative fuel. The possible disruption of Nat Gas supplies to Europe comes on the heels of Biden’s visit to Saudi Arabia. The visit appeared to fail to get any solid assurances that the Saudis would boost oil production above current plans. In the background, was the weaker dollar along with ideas the US Federal reserve was unlikely to raise rates as much as 100 points at their upcoming meeting. Although economic growth concerns remain in the background particularly in China and Europe, these fears were pushed into the background in favor of the renewed supply concerns.

We still see that in the absence of a major recession, the oil supply concerns notwithstanding an unlikely settlement in the Ukraine or a breakthrough in the Iranian nuclear negotiations; that values will likely trend higher and have potential to test the 109-110 and possibly the 115 area basis prompt crude. A hardening of prices to the upside might lead to some softening in disappearance rates which will need to be tracked closely for prevailing trends in the weekly DOE report.

The DOE report is expected to show crude inventories up .3 mb, distillate up 1.2 and gasoline off .7. Refinery runs are expected to have risen .5 to 95.4 percent. 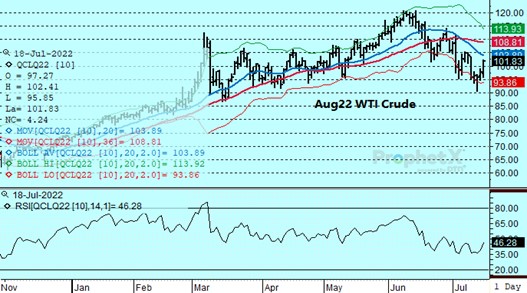 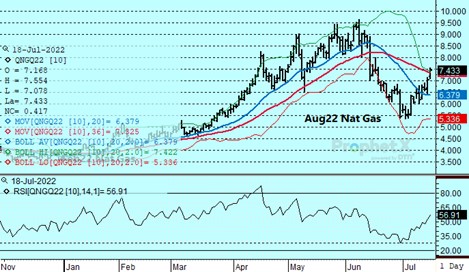 The week kicked off with strong follow-through to the upside as the August contract tested above the 7.50 area, completing a 50 percent retracement of the June break. The hot weather regime that is settling in across the country this week is taking the blame for the rally, but weekend weather revisions left demand basically unchanged, albeit well above normal. With production again moving up over the weekend and exports steady, the rally, which exceeded 50 cents, again appears to have been amplified by poor liquidity along with some fund short covering. Overseas issues offered background support as Russia’s Gazprom declared a force majeure on Nord Stream 1 as concerns grow as to whether flows return after unplanned maintenance on the pipeline. The 8-dollar level looks like the next upside target for the bulls, but with renewable generation showing improvement later this week they may have to go after it soon. When the market runs out of steam the retrenchment could be rapid, with initial support likely in the 7 dollar area and then down at the 100-day moving average near 6.75.