The petroleum complex traded mixed with the Monthly IEA and DOE reports along with dollar movement helping limit crude but pressuring values and margins in gasoline.

The IEA painted a mixed supply/demand picture. The monthly report indicated that higher prices and a deteriorating economic environment were taking a toll on oil demand, with growth moderating 1.7 mb in 2022 to 99.2 mb/d. Some June expansion in supply was noted, rising to 99.5 mb/d on resilient Russian production and higher output from the US and Canada. Global supplies were forecast to average 100.1 mb/d in 2022, reaching as high as 101.3 by the end of the year. Russian exports were at 7.4 mb/d, the lowest since August 2021. Global oil inventories rose by a modest 5 mb in May as a sharp increase in non-OECD crude stocks was offset by lower OECD stocks. Industry stocks remain below the 2017-2021 average by 301.3 mb despite the release of 32.1 mb of government reserves. The Agency said the outlook has never being more uncertain with the worsening macro-economic situation and fear of recession being offset by risks on the supply side. Given that the IEA indicated that spare capacity for the UAE and Saudi Arabia was 2.6 mb/d from June levels, the response of those countries to President Biden’s Middle East visit will be watched closely.

The DOE report showed a build in commercial crude inventories of 3.3 mb, with 6.9 released from the SPR. Gasoline stocks rose sharply by 5.8 mb while distillate rose 2.7. The large gas build along with weaker disappearance levels weaken the crack. Distillate also showed weaker disappearance but failed to follow-through on the initial weakness in the 2-oil crack. Refinery utilization recovered by .4 to reach 94.9 percent. It appears the improved inventory situation was tied to weaker export levels of gasoline.

Demand concerns appear to be discounted below the 95.00 level, and the direction of the dollar following today’s downside reversal might play a role in helping support values and turn attention to the supply side and how effective sanctions have been at limiting Russian export levels. Demand considerations, particularly in China, will be important if values rally into the 110-115 area, as will Saudi Arabian production levels. 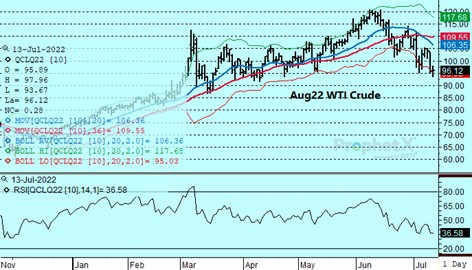 After experiencing some spillover weakness from yesterday’s broad-based selloff in commodity markets, the natural gas came roaring back today to post gains of more than 50 cents as the August contract settled at 6.689. Another pullback in production levels following weekend improvements and extremely warm temperatures over portions of the US have garnered the headline credit for the rally, but the market appears to lack the depth to reign in price moves in either direction. Tomorrow’s storage report is the next likely instigator of price overaction, with estimates pointing to a 58 bcf injection compared to the 5-year average of 55. A smaller than expected build will find initial resistance in the 6.97 area which marks a 38 percent retracement of the June break. A larger injection would not find substantial support until the 6-dollar level. 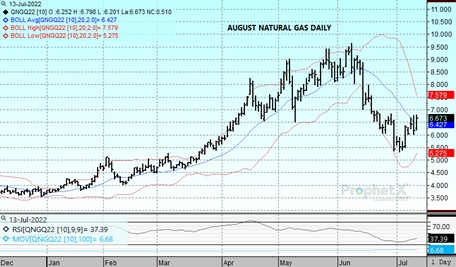 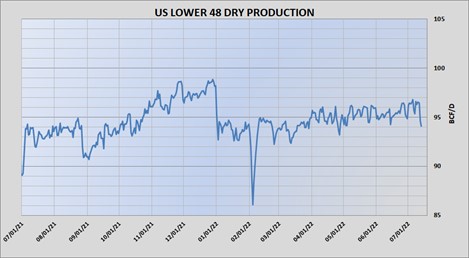