An intensification of COVID restrictions and testing in China pressured crude oil values, while product markets saw buying interest on the cracks following recent declines. Continued strength in the dollar and weakness to equity markets also weighed on crude values ahead of Biden’s visit to Saudi Arabia later this week.

The market is torn between demand uncertainty due to global recessionary trends and likely higher interest rates, while supply concerns tied to Russian sanctions and limited spare capacity persist. Of note are questions over Saudi sustainable production capacity, with some suggesting that they may not be able to increase output by more than 1 mb/d over current levels. Offsetting these concerns has been the reliance on Russian imports by two of the world’s largest consumers, China and India, who have not adopted Western sanctions but are instead increasing import levels from Russia at discounted prices. Adding to supply uncertainty has been recent proposals by major Western powers to place a price cap on Russian oil prices. Fear such an action will lead to retaliatory action by Russia and a dramatic cut in exports has been moderated with respect to its impact by the recessionary trends in the global economy. Nevertheless, supply concerns persist and could be magnified if Russia disrupts shipments from Kazakhstan by closing the CPC pipeline that carries oil to the Black Sea.

For now, crude oil looks poised to consolidate, with a moderate recession currently priced in given the supply constraints. Key to the outlook will be the Fed policy response following the CPI report on Wednesday. Demand considerations, particularly in China, will be important if values rally into the 110-115 area, as will production levels of Saudi Arabia.

The DOE report is expected to show crude inventories off 1.9 mb with distillate stocks up 2.4 and gasoline lower by .3. Refinery utilization is expected up .4 to 94.9 percent. 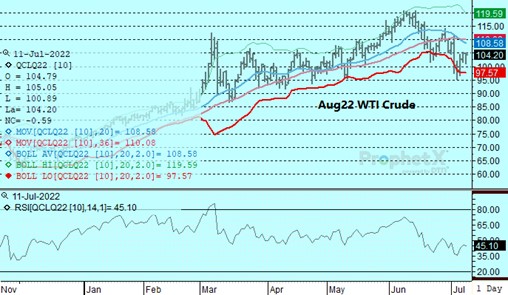 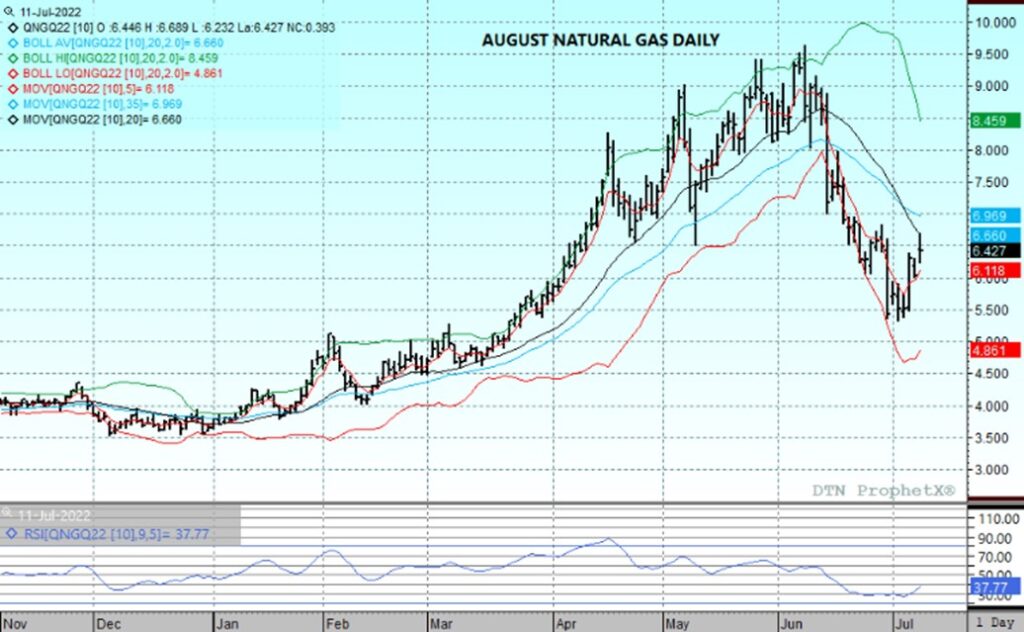 Prices spiked overnight and held on to most of their gains into the close as the August ended the day 39.2 cents higher at 6.426. The extent of the daily moves continues to be exaggerated as volume has steadily eased. Extreme temperatures in Texas and other regions initiated the upside bias, as the heat forced ERCOT to request that consumers cut back on energy use as today’s demand could set another record. Forecasts for the rest of the US remain above normal in the 15-day outlooks, but probably not enough to justify a 60-cent intraday move higher. Production revisited the 96 bcf/d area over the weekend while LNG flows remained near 11 bcf, neither of which added much to the upside argument. The test and failure at the 100-day moving average near 6.65 makes that level initial resistance, while the 6-dollar area would be the first notable support on a pullback.