The petroleum complex attracted support early but failed to follow-through at the higher levels. Early strength was linked to a weaker dollar and sharp gains in the equity markets following the jobs report, which showed continued strength in the labor market, but with wage gains continuing to slow. Additional support was provided by optimism over travel during the upcoming Chinese New Year from January 22nd to February 5th. Forecasts suggest that an easing of COVID restrictions might lead to a doubling in passenger traffic from last year. In the background were reports the Chinese government had made arrangements with Pfizer for the purchase of the COVID treatment Paxlovid, which might signal softening in their approach to offering other foreign made therapies and vaccines that have proven to be more effective at preventing COVID. Skepticism emerged in late trade over how quickly this process develops, and whether more normal travel occurs. The uncertainty over the Chinese economy remains a key consideration in the demand outlook for oil early in 2023. In addition, signs the US government is willing to pursue purchases for the SPR in the low 70 dollar area should provide support on setbacks.

The DOE report released yesterday shed little light on the prevailing supply/demand situation and seemed to undercut the early rally attempt. Frigid temperatures led to lower refinery throughput, weak disappearance and higher crude inventories during the reporting period.  Commercial crude stocks rose by 1.7 mb, with movement out of the SPR of 2.7 mb. Gasoline stocks fell by .3 mb while distillate declined 1.4. Refinery utilization fell sharply to 84.8 percent, a decline of 4.1 as operations in Texas were disrupted by the frigid winter conditions, and only now are these refineries reopening. Total disappearance was also affected, falling to 18.2 mb compared to 22.8 last week. Net export levels remained robust at 3.1 mb, an increase of .8 from the prior week.

Supply availability has improved in Europe and Asia as reflected by increases in product inventories and a reduction in the OSP by Saudi Arabia for February deliveries in Asia. Russian availability to China and India, who are not a party to the price cap by G-7 members, has been higher than expected. In addition, moderate temperatures and a decline in manufacturing activity has undercut demand for middle distillates. A recovery in demand from China will be key to price strength from current levels and will also provide confidence in the state of the global economy. For now, consolidative price action is likely, with resistance at 77.00 basis February and support near the 70.50 area and below there in the 66-68 range. 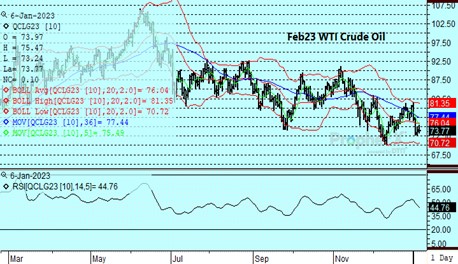 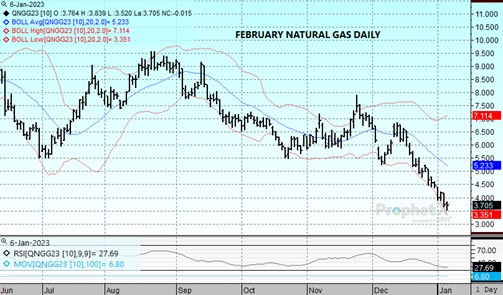 Weakness resumed in the natural gas after Wednesday’s brief respite, as the February contract lost 45 cents yesterday and followed that up with an early test of the 3.50 area in today’s session before finding late support to end near unchanged levels at 3.71. Weather remains the driving force as additional warming in the overnight model runs kept pressure on prices. Yesterday’s storage report added to the weakness, with the 221 bcf draw well below estimates despite being above average for this time of year due to last week’s extreme cold. With little news from Freeport and a wide range of opinions on its return, trade will remain driven by weather models. The oversold condition of the market, now on it’s seventh straight day with RSI below 30 percent, could intensify a rebound if forecasts can bring in some cold. Minor resistance near 4 dollars would be brief with the 4.40 area the next target. The 3.50 level marks key support, with a failure there likely leading to a test of 3 dollars.