The petroleum complex continues to falter with crude falling 4.09 today following a decline of 3.33  yesterday. Products have not fared much better with gasoline off over 20 cents and diesel falling by over 33 cents from levels reached on Dec 30, 2022. Weakness has been linked to a variety of forces that include fears that despite  the easing of COVID restrictions in China , the sharp increase in COVID infections has kept mobility limited in that country. In addition, ideas the Fed will likely pursue a tighter monetary policy longer than expected raising the risk of recession also appeared to weigh on sentiment. Adding to the demand concerns are above normal temperatures in both the US and Europe leading to downside revisions in demand forecasts.  On the supply side, an increase in export quotas for refined products by China for early 2023 suggests demand in that country might be weaker than expected. OPEC oil production also was reported to have increased in December despite the agreement to cut production targets. OPEC production reportedly rose 120 tb/d to 29 mb/d  from November levels. The weaker demand in Asia also is undercutting Arab Light differentials with talk circulating that Saudi Arabia will lower their Official Selling Price (OSP) for February deliveries to levels not seen since late 2021.

The ban by Putin on the sale of crude and products to countries that put a price cap on their supplies has not had any appreciable impact on the supply of oil as India and China, two of the world’s largest consumers continue to make purchases at discounted prices while oil that it replaces from other origins finds it way to supply those who are adhering to the price ban. While inventory levels are still low, weaker consumption due to a combination of tighter monetary policies, dollar strength and price resistance has helped undercut values.

The market is once again approaching levels where purchases for the SPR might once again take place helping to stabilize values. Tomorrow’s delayed DOE report might also shed some light on  how precarious the inventory level and demand situation has become. The report is expected to show crude stocks off 1.6 mb, distillate off 2.1 and gasoline up .1 with refinery runs -1.8 percent at 89.1 percent. 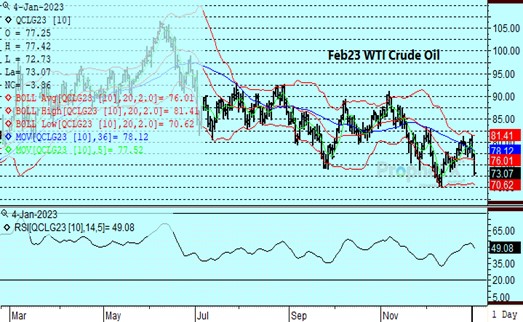 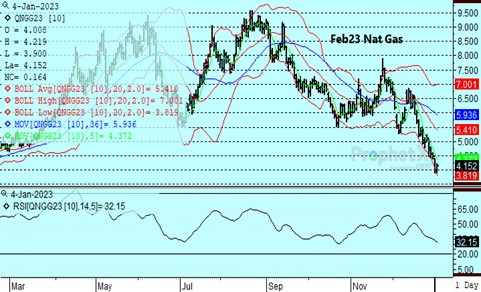 The market took a breather following the sharp declines of the past few weeks to end moderately higher as support emerged below the 4.00 level basis Feb, at levels not seen in over 10 months. In the background, remains uncertainty over the restart of the Freeport NGL facility which appears imminent but still is pending regulatory approval. The return of Freeport, should increase US demand for gas by as much as 2.1 bcf/d. The Freeport facility was shut in June due to fire and should help weaken the arbitrage between foreign quotes and US prices. In the background, has been the moderate temperatures in the US and Europe which has helped limit demand for heating leading to smaller draw downs in inventories than had been expected.  With gas in storage still 10 percent below the 5 year average, the EIA report will be watched closely with expectations pointing to a draw of 220 bcf in inventories. For the most part, we see the bulk of bearish news including more moderate temperatures as discounted and would not be surprised to see a recovery back up toward the 5.00 level basis Feb as the market anticipates the reopening of Freeport and a pick in US exports of LNG and better industrial usage given the more attractive prices.