The petroleum complex shifted focus to assess the underlying influences that will be commanding attention over the next few months with OPEC+, demand repercussions from Covid, and economic activity continuing to be in a state of flux.  Low stock levels and shortfalls in OPEC+ production have largely been priced in and the market appears to be awaiting fresh developments. Heightened geopolitical tensions remain in the background but have not yet had any appreciable impact with the exception of some risk premium being reflected in current values.

The move from a high of 87.10 yesterday to a low of 82.78 today suggests uncertainty over the intermediate outlook and the view held by some that prices will rise to 100 dollars per barrel. Instead some softening in the bullish outlook appears to be occurring. Of concern is OPEC’s reticence to allow prices to move much higher given the impact on demand, and potential supply expansion outside of OPEC.

The IEA monthly report suggested that much needed relief for tight oil markets is on the way, with forecasts for world oil supply to overtake demand starting in January.  This raises some caution flags for the current bullish scenario. Ideas that the markets might be turning from deficit to surplus was reinforced by the DOE weekly report which showed commercial crude inventories rose by .5 mb for the first increase since November.  Although the rise was modest, it did exceed the forecasts for a .9 mb drop.  In gasoline, inventories rose by 5.9 mb and are at a ten-month high.  Distillates fell by 1.4 mb.  The biggest declines in inventories occurred in propane and other oils which were down 3.7 and 3.6 mb respectively, with total petroleum stocks excluding the SPR declining by 1.5 mb. Disappearance levels for gasoline were slightly below pre-Covid levels at 8.2 mb compared to 8.5 in 2020 while distillate disappearance exceeded pre-Covid levels at 4.6 compared to 4.4 in 2020.

We still see the market as potentially underestimating the recovery in crude production outside of OPEC+. One example is in Argentina, where oil production hit a near decade high at 559 tb/d in December.  One shale formation, Vaca Muerta, saw an increase of 64 percent. Baker Hughes today reported weekly rig counts in the US increased by 3 to 604 compared to 378 last year while in Canada rig counts increased by 21 to 212, a sharp acceleration. The data tends to support the IEA expectation that the biggest increase on the supply side will occur in the US, Canada, and Brazil while Saudi Arabia and Russia could set records provided OPEC+ cuts are unwound. 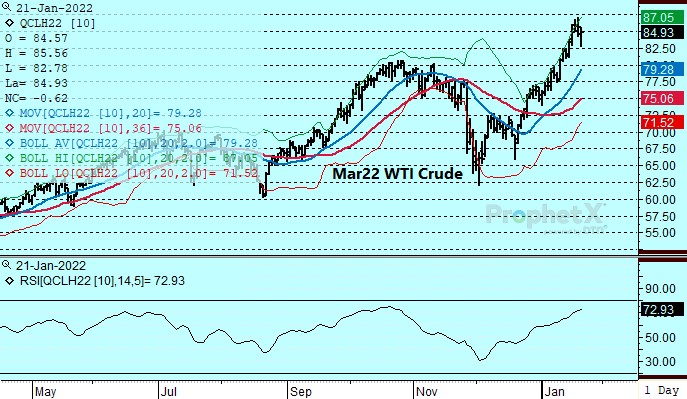 The market continued to give the appearance of throwing in the towel on winter, losing another 20 cents yesterday and reaching an intraday low at 3.629 on the March contract before finding support in today’s session to end the week at 3.782.  Current cold temperatures continue to be ignored in favor of expectations for a normalization in February that could lead to end of season stocks at comfortable levels.  Yesterday’s storage report showed a sizeable 206 bcf draw which did not immediately support the market, although prices did bottom soon after the release and began the recovery that carried over into today’s trade.  The large draw likely rekindled buying interest on concern of high side risks as the next two reports are expected to be above 200 bcf as well. Today’s bounce was achieved on light volume with an inside day on the chart.  The path of least resistance appears to be downward with the lows near 3.41 the only obvious support.  The market will need to see a trend toward colder temperatures in early February to attempt a move through resistance in the 4.00 area. 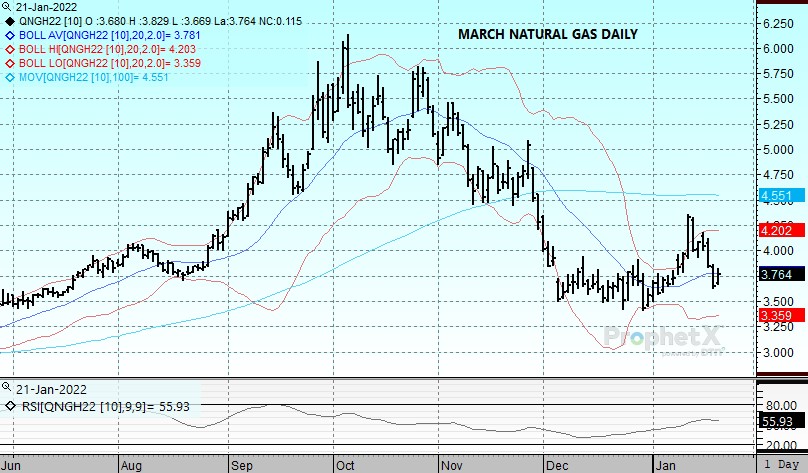