Crude oil continued to trade above the 100-day moving average at 80.38 basis the March, dismissing the sizable build in DOE crude stocks of 8.4 mb reported yesterday and continuing to focus on the potential recovery in the Chinese economy and its positive impact on demand. Refinery margins have also found significant strength, with the cracks surging. The March 2 oil crack traded up to 60.00 today after trading near the 48.00 area at the beginning of the year while gasoline crack has shown an even stronger bias, rising to over $30 per barrel from as low as 15 in early December. The approach of an embargo on Russian product imports slated for February 5th by the EC, along with weather related shutdowns, has fostered the stronger tone.

The potential for increases in refinery throughput should provide resistance to the cracks given the recent gains and overbought condition. The better availability of crude as evidenced by the DOE report and strong margins is likely to boost refining activity, leading to better availability of refined products. Chinese exports have already increased, and declining freight rates are helping move product to Europe from the Middle East ahead of the import embargo. Although refinery utilization at 85.3 percent has been slow to rebound, we would expect a quicker pace of increases in the weeks ahead along with capacity additions out of the Middle East to help ease supply tightness in products and the support from products to crude. 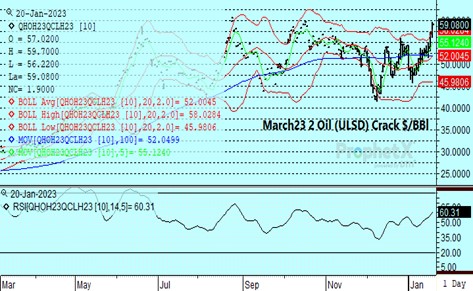 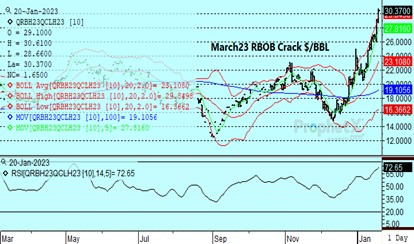 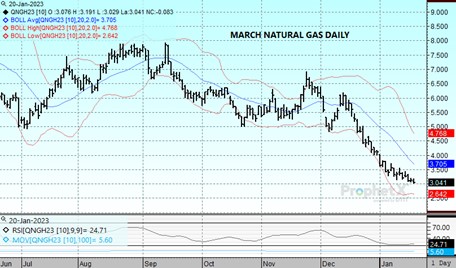 Prices continued to struggle in the second half of the week, putting in a new low every day since Wednesday. The February reached down to 3.092 today while the active March contract made a low at 2.985, settling with a loss of 8.8 cents at 3.036. Volume was low to end the week, and volatility has contracted recently as indicated by a drop in margin requirements from the CME today from $7,000 to $6,000 per contract. Forecasts remain docile, with a return to normal levels for the 15-day outlook unable to stir up concerns regarding supplies. Yesterday’s storage report came in with an 82 bcf drawdown, well above estimates near 71, but could only temporarily goose the market as overall stocks have climbed above the 5-year average and look likely to increase further next week. Until colder temperatures emerge, or Freeport indicates a return of operations, the market will be restrained and continue to probe out new lows. 3 dollars remains the initial target and failing there, 2.50 would be next in line. Despite the relentless weakness, upside risk remains substantial considering the oversold status of the market and the pending return of Freeport. Cold temperatures will be necessary, but if the 9-day moving average at 3.25 basis March can be violated, there would be minimal resistance to a move back toward the 4.20, which marks a 38 percent retracement of the break since mid-December.