The petroleum complex failed to follow through on early strength as buying dried up above the 100-day average, which stood at 81.15 for February crude. The buying was tied to  expectations of a recovery in petroleum demand in China as the relaxation of COVID containment measures supported ideas of an imminent economic recovery following weak activity last quarter. During 2022, China’s growth slowed to 3 percent compared to the official target of 5.5 percent, the worst performance since 1976. Potential for Chinese growth to recover back toward 4.5 percent in 2023. The gains could not be sustained given the appearance that inventory levels have improved and on developing weakness to the US economy.

According to the IEA monthly report released today, the recovery in China is expected to boost global demand by 1.9 mb/d in 2023 to a record high of 101.7. Nearly half of that gain is attributed to China, with jet fuel the largest source of growth. World oil supply growth is forecast to slow to 1 mb/d following last year’s growth in OPEC+ supply of 4.7 mb/d. An overall non-OPEC rise of 1.9 mb/d will be tempered by an OPEC+ drop of 870 tb/d due to expected declines in Russia. Leading sources of supply growth in 2023 are expected to be the US, Canada, Brazil and Guyana. Refinery activity is expected to expand by 1.5 mb/d following an increase of 2.1 in 2022. Capacity additions are expected at 2.2 mb/d from the last quarter of 2022 through 2023 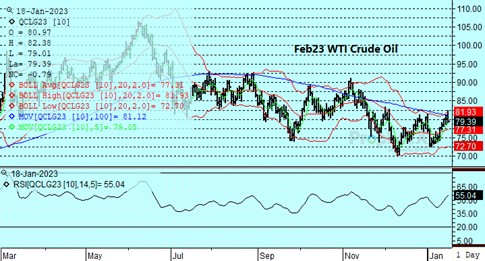 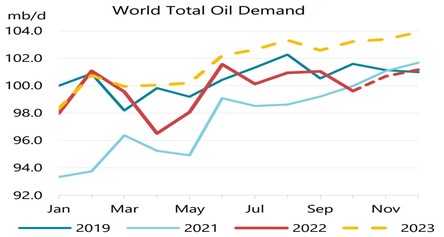 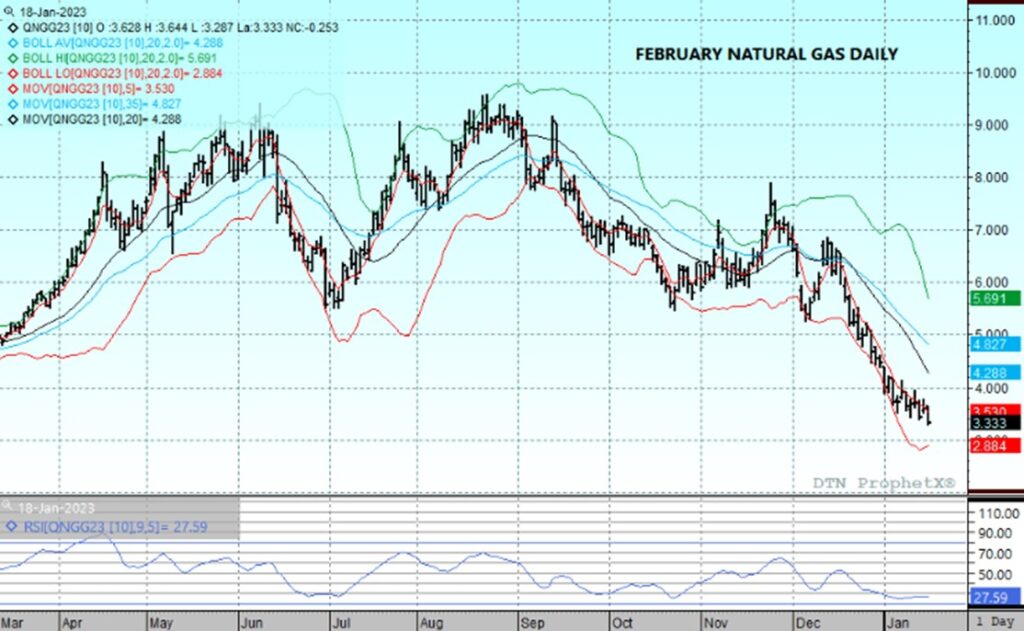 The Chinese recovery will be a primary consideration for higher prices along with economic activity in the G-7. Near term demand recovery in the US will also be watched closely in the DOE report scheduled for release tomorrow due to the holiday. Forecasts indicate a decline in US crude inventories of 1.8 mb, with distillate and gasoline expected to build by .5 and 2.3 respectively. Refinery utilization is estimated to have increased by 3.8 percent to 87.9.

After the long weekend the story hasn’t changed in natural gas. Weather continues to guide movement, as cooler forecasts pushed prices higher yesterday, with the February contract up over 30 cents intraday. Those gains were snatched away with overnight revisions removing most of the estimated demand increases, as prices probed out new lows for the move during today’s session. The market ended the day with a loss of 27.5 cents at 3.311. Production reached 99 bcf/d over the weekend and continued to be a constraining influence as Freeport remained silent, with the second half of January being their last suggested restart date, which gets less likely with each passing day. The new lows and poor close puts 3 dollars clearly in sight. Despite the swing in forecasts, the end of the month is still pointing to a normalization in temperatures and a possible swing below average, which leaves upside risk substantial considering the oversold status of the market and the pending return of Freeport LNG. If the 9-day moving average near 3.63 is taken out, there would be minimal resistance to a move back toward the 4.80 and a 38 percent retracement of the break since mid-December. Tomorrow’s weekly storage report is expected to show a draw of 71 bcf, well below the 5-year average decrease of 156.