The petroleum complex traded to the upside, with values advancing to as high as 77.84 basis February crude before settling at 77.58, an increase of 2.46 for the day. The products and crack spread also strengthened as sharp increases in crude inventories supported the ULSD and gasoline cracks. The move was surprising given the DOE report, which showed a large build in inventories as refineries remained slow to recover following the Christmas freeze. Optimism over the global economy along with concern over Russian availability following the import ban and price cap remained in the background as supportive influences, along with the reopening of China following COVID lockdowns.

The DOE report showed crude inventories increased 19 mb last week, the largest increase since rising by a record 21.6 mb in February 2021. The jump was attributed to refineries remaining slow to return to normal production levels following the freezing temperatures in late December. Refinery utilization totaled 84.1 percent compared to 79.2 percent last week and 88.4 percent last year. Distillate inventories fell 1.1 mb while gasoline increased by 4.1. Net exports fell sharply to 752 tb/d from 3.1 mb/d in the prior week. Total stocks of crude and products rose 22.4 mb, excluding the SPR draw of .8. Total disappearance remained weak at 17.6 mb compared to 18.2 the prior week and 20.8 last year. Gasoline disappearance was 7.7 mb/d compared to 7.9 a year ago while distillate disappearance totaled 3.8 mb/d.

For tomorrow the market will be watching the CPI report and any signs the Fed might back off from their hawkish monetary policy if the number comes in below expectations and leads to lower rates and a weaker dollar. The recovery of the Chinese economy will also be monitored closely as we move toward the Lunar New Year, when sharp increases in travel are expected. Soviet availability will also be a key consideration following comments by Russian officials suggesting that in the wake of the price cap and crude import ban, export have not been affected despite a sharp increase in discounts of Russian crude to international benchmarks and in freight rates.

The rally on the heels of the DOE report was surprising, and we expect to see valuations find resistance near current levels and trade in a consolidative fashion, awaiting more concrete news on demand. Supply availability has improved in the US, Europe and Asia as reflected by increased inventories. Chinese demand remains key to the markets ability to break out on the upside. 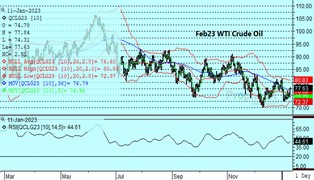 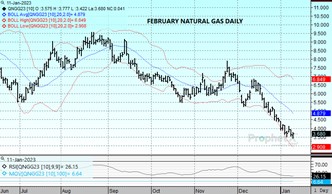 The natural gas market traded sideways for much of the session but managed to probe out a new low for the move at 3.422 this morning. Prices are searching for a bottom as the return of Freeport nears and three weeks of lower action has left the market oversold, with a substantial portion of winter still ahead of us. Without the arrival of colder weather, the market will continue to be constrained by ample production and comfortable storage levels in the US and Europe. Tomorrow’s weekly estimates are pointing to a small draw near 17 bcf, which compares to the 5-year average for this time of year at 157 bcf. There has even been talk of the possibility of a small stock build, which has added to the negative overall bias. With the slightly higher close today, upside follow-through will find initial resistance at the 9-day moving average near 4 dollars, with a push past there targeting 4.80, marking a 38 percent retracement of the break since mid-December. The 3.50 level remains key support on a settlement basis, with a failure there likely leading to a test of 3 dollars.