The petroleum complex continued to trade on the defensive, as a bearish DOE report for products weighed on values following early buying on the further relaxation of Covid regulations in China. The weakness has taken the net speculative fund position to 6-year lows as the market failed to respond to what many had thought would be supportive news surrounding the import embargo by the EU, along with the price cap on Russian crude oil by the G-7.

The DOE report showed commercial crude oil inventories falling by 5.2 mb. Distillate inventories built by 6.2 and gasoline was up 5.3 mb. Overall, commercial stocks of crude and products rose by 5.9 mb.  The large build in distillate inventories helped pressure the cracks to levels not reached since early September, dipping to 44.50 today basis the January contract compared to the high over 65 per barrel in early November. We suspect the weakness in disappearance levels for distillate is a function of the high price for diesel relative to crude, and because demand for cash barrels has softened as users utilize stocks built up earlier in the fall in anticipation of shortages. Disappearance levels remain lackluster, with gasoline in the most recent 4-week period off 7.1 percent against a year ago, while distillate is off 9.8 percent. Net exports in today’s report were also disappointing at 1.4 following last week’s level of 3.8 and the 4-week average at 2.1 mb/d.

The failure to hold the 75.00 area basis January crude has taken values well below levels we expected, but given that demand will likely recover as stocks are drawn down at the secondary levels, we remain cautious at pursuing the short side given the uncertainty surrounding Russian availability and the tightness in inventory levels next year. 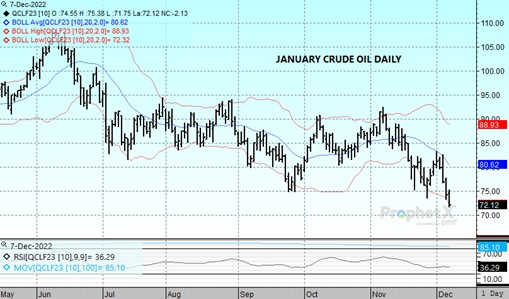 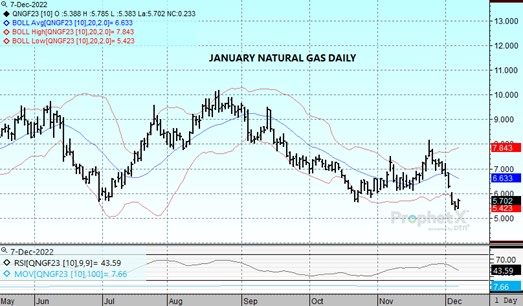 After reaching a low at 5.337 basis January yesterday, the market has found some footing as it  traded higher for much of the session today before settling with a gain of 25.4 cents at 5.723. A swing to cooler temperatures in the middle to back half of the 15 day forecasts was responsible for the recovery, with the 10-15 day now calling for colder than normal termperatures. The bounce was aided by the technically oversold level of the market. After a string of much warmer than normal temperatures over much of the US, tomorrow’s storage report is expected to show a draw of 31 bcf, well below the average decrease for this time of year at 49. The 5.30-5.35 support range held up yesterday. A violation of that level would point to 5 dollars as the next downside target. If the cooler turn to temperatures can continue, initial resistance in the 6 dollar level likely gives way to a push to fill Monday’s gap to 6.22.