Crude oil register gains of over 2 dollars to settle at 79.56, while products saw more impressive moves, with RBOB up over 14 cents and diesel showing gains of 12 cents basis February. The strength was linked to reports Russia will cut production by 5-7 percent in early 2023 as it responds to the price cap, and will halt sales to countries that support them. Deputy Prime minister and Energy Minister Novak suggested that it would be difficult to provide for global economic development without Russian energy exports, and suggested their oil is in demand from other buyers not participating in the cap. They produced 10.7 mb/d of oil in 2022, suggesting the cut in production might reach between 500-700 tb/d. The reduction is expected to be announced by Putin early next week.

A cut would limit export revenues for the Russian government and pose additional challenges to their economy given recent weakness to the Ruble and the impact of the war in Ukraine. The ruble had recovered following the start of the war, when it reached a low of .8 cents, rallying to as high as 1.9 in August and is currently at 1.4 cents. The weakness is linked to Russian setbacks in the war and on uncertainty regarding the Chinese economy, which has been a major economic supporter of Russia. A contraction in export levels of Urals crude has already taken place, and the possibility that differentials will remain weak despite a Russian production cut is possible given increases from Libya and Nigeria. 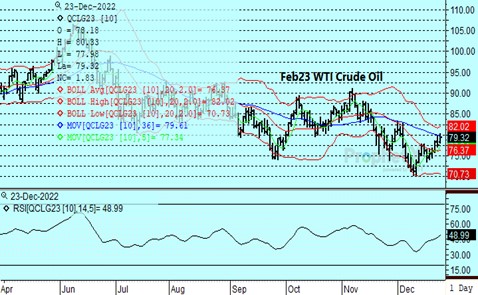 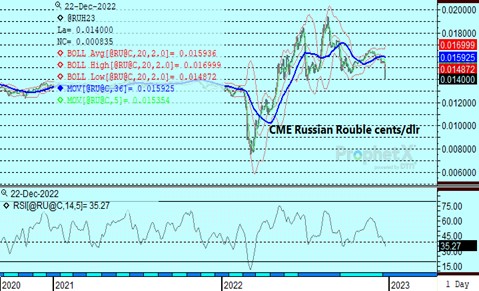 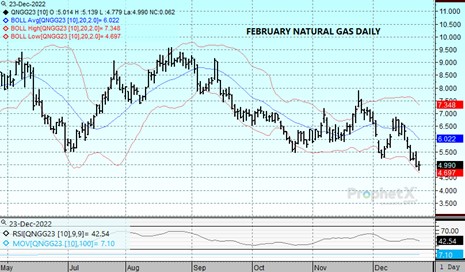 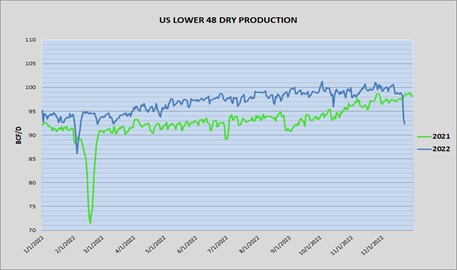 Price potential is contingent on stock levels and the reliance on supplies outside Russia, particularly from the US. In the intermediate term, there is potential for values to move toward the 100-dollar level on supply tightness in the first half of 2023 as demand in Asia shows resiliency. Near term resistance is in the 80-82 range on our belief the Russian news is priced in, and uncertainty over economic trends given tight global monetary policies. Support on pullbacks toward 76.00 basis February should be stiff.

The markets desire to test the 5 dollar level was fulfilled yesterday, with the February contract settling at 4.928. Additional selling pressure early today saw an intraday low reached at 4.779 before prices finally found support as short covering emerged ahead of the long, cold weekend as the active month ended with a gain of 5.2 cents at 4.98. Trade continued to look beyond current extreme cold and substantial production losses from freeze-offs, instead focusing on the swing to above normal temperatures expected early next week as forecasts trend warmer with each model run. Yesterday’s storage report didn’t help muster any buying interest as it indicated an 87 bcf injection, well below estimates near 95 and leaving total stocks slightly above the 5-year average. Mild European temperatures may be playing a background role in weakening the market, although exports continue to clip along near maximum capacity. Freeport announced a delay to their restart plans into the second half of January, which wasn’t a surprise but still acted as a negative influence. With production losses surpassing 5 bcf/d and extreme cold dipping into Northern Texas, some concern regarding the potential for longer-term fallout from freeze-offs reminiscent of February 2021 induced underlying support. The 4.75 area now stands out as a key support level, with a settlement below there likely leading to a deeper washout that would target the 3.50 area. The steepness of the selloff has intensified upside risk, with any change toward a colder trend possibly igniting a rapid rebound that could quickly test 5.50 but likely not encounter significant resistance until the 6 dollar area.

**There will be no Brief published December 26th through January 2nd due to the holidays. See you in the New Year!**