The petroleum complex continues to attract good support, with crude settling higher by 2.06 at 78.29 basis February, diesel gaining over 8 cents, and gasoline lagging with gains of just over 3 cents. A variety of factors have contributed to the strength, with a larger than expected draw down of crude inventories in the DOE report in focus today.

The DOE release showed commercial crude inventories falling by a 5.9 mb despite an additional withdrawal from the SPR of 3.6 mb. Cushing stocks continued to build, rising by .8 mb while Gulf Coast inventories of crude fell 4.8. Distillate stocks fell marginally by .2 mb, while gasoline inventories rose by 2.6, which helped support the 2-oil but weakened the gasoline crack. Total crude and product stocks excluding the SPR fell by 11.6 mb. Net imports of crude totaled 1.4 mb compared to 3.3 mb a year ago. Net exports of products have surged, averaging 3.8 mb this year compared to 2.7 last year, an increase of 41 percent. With net exports of crude and products reaching 3.0 mb/d in the latest week, cumulative exports for the year have totaled 1.1 mb against a net import level last year of .5 mb. For crude, imports are off 13.9 percent against last year. Disappearance levels overall have remained lackluster for products, showing an increase of .8 percent.

The decline in stock levels is a key supportive element, which is being exacerbated by the appearance that Soviet supplies are tightening due to the price cap. The demand side remains a limiting influence. Expected expansion in Chinese and Indian demand should be enough to underpin values near current levels, particularly in the absence of significant draws in the SPR. Eventually the higher prices will lead to production increases, which is already happening but at a slower than expected pace due to supply chain and capital investment restraints. We see the potential for values to eventually move up to the 100-dollar level over the intermediate term, with resistance near 80.00 as uncertainty over economic prospects limits near term follow-through. 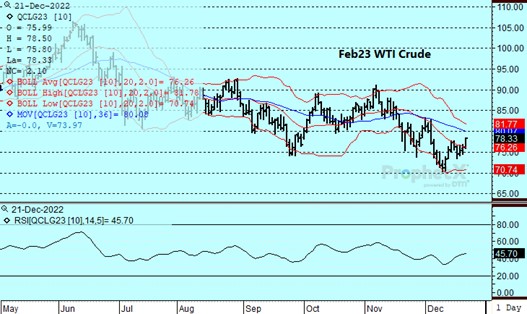 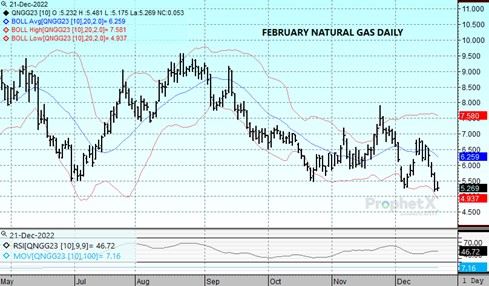 After considerable downside follow-through yesterday that saw the active February contract lose  another 50 cents and breach the early December lows, prices saw some minor recovery early today before ending near unchanged levels. The imminent arrival of severe winter storms and cold temperatures into the Christmas weekend brought out the buying interest, but upside momentum could not be maintained as the warmup expected into the end of the month and early January has monopolized the attention of trade. The markets quick and substantial move lower this early in the season has removed all risk premium, as signs that Freeport was taking in gas could not even muster much buying interest. With production continuing to be restrained by freeze-offs and LNG flows tapping against 13 bcf/d, the upside risks are becoming substantial. Any signs of cold temperatures moving back into the forecast could ignite a rebound that would not encounter significant resistance until the 6 dollar area. Near term the market seems determined to probe lower, with the 5 dollar level offering solid support, and below there you have to look to a weekly chart, where 4.75 would mark the next target.