Prices saw retrenchment to end the week, with January crude losing $1.82 today to settle at 74.29, while the gasoline slipped by nearly 3 1/2 cents and the heating oil dropped by over 16 cents, catching up with the other markets after trading unchanged yesterday. The trade was digesting multiple inputs including recession fears, Covid outbreaks in China, and end-of-week profit taking.

Economic concerns were the overriding negative factor as hawkish Fed comments suggesting further rate cuts next year, along with aggressive action by European Central banks yesterday to raise rates lead to heavy selling in equities and strength to the dollar. The worsening Covid situation in China has also raised demand fears and questions as to whether the government will follow through with its easing of restrictions. 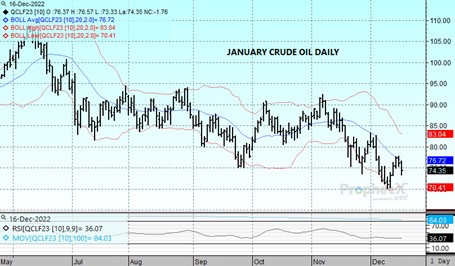 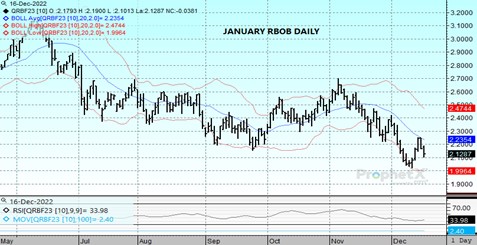 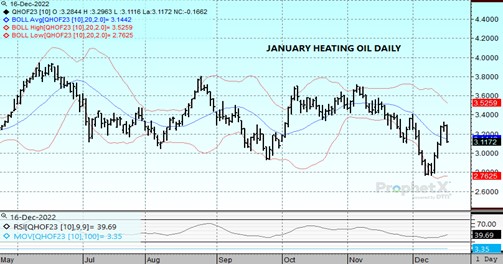 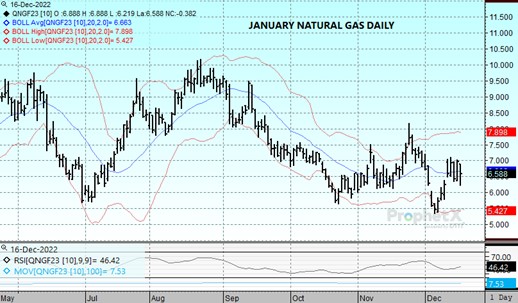 We expect underlying support to emerge, although near term follow-through is likely as the market digests economic concerns while waiting on information regarding the Keystone leak. Initial support comes in near the 9-day moving average at 73.85, and below there at 73.20. The 20-day moving average at 76.70 is the first upside target, with trendline resistance from the November and December highs coming in near 77.60.

The market spent much of the week trading between 6.50 and 7 dollars, probing below that range multiple times but unable to firmly break out in either direction. Weak trade was seen today as HDD expectation were trimmed into the end of the month. The selling pressure lead to a test under the 9-day moving average near 6.32, but prices managed to claw back to settle with a 37 cent loss on the day at 6.60. An all-out route was avoided as underlying support was offered by production losses from freeze-offs, as output has been below 99 bcf since Wednesday, and solid LNG flows that reached 13 bcf yesterday. In addition, despite the demand losses late in the forecast, the majority of the US is still going to see frigid temperatures next week leading up to Christmas, with single digits and teens across much of the country. Yesterday’s storage report indicated a 50 bcf injection compared to the 5-year average build of 93. Support rests near 6.32 and below there at 6.13. As the cold moves in next week, 7 dollars will mark a key level, with a settlement through there possibly leading to a quick run to the November highs above 8 dollars, with resistance on the way at the 200-day moving average near 7.39.