The petroleum complex continued to attract good support, with crude values settling at 77.28 today for a gain of 1.89 while ULSD settled 18.46 cents higher at 3.2768, and gasoline rose by 8.35 cents to end at 2.2444. Forecasts by the IEA suggesting that demand growth in 2023 would not be as bad as previously expected helped garner buying interest against a background of tightening nearby availability due to the leak on the Keystone pipeline, along with the import embargo and price cap on Russian crude.

The IEA Monthly report indicated that oil demand in 2023 will reach 101.6 mb/d, an increase of 1.7 mb/d. Supplies are expected to fall by 190 tb/d in November to total 101.7 mb/d. Further declines are expected as the EU ban on Russian crude imports along with the price cap constrict Russian supplies. Global observed inventories declined by 23.2 mb/d in October. Inventories are likely to remain at low levels as we move through 2023 with a net draw likely in the first quarter, followed by modest increases for the remainder of the year.

The DOE report appeared bearish but was not treated as such. A build in commercial crude inventories of 10.2 was sharply above expectations for a draw of 3.9. Sales from the SPR totaling 4.7 mb were unexpected along with a sharp decline in refinery throughput, given the fall off in refining margins, accounted for the increase in inventories. Product stocks showed increases of 1.4 in distillate and 4.5 mb in gasoline. Refinery utilization was at 92.2 percent compared to 95.5 last week. Cushing stocks rose by .5 to 24.4 mb while net exports of both crude and products was indicated at 1.7 mb/d compared with 1.4 mb in the prior week. 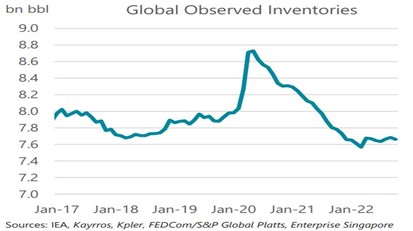 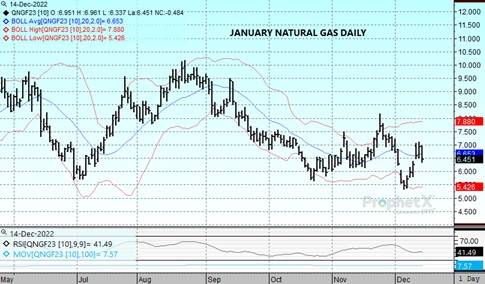 We continue to look for better underlying support to emerge, although the strong rally might encounter some near-term resistance given the DOE report. The Keystone leak will remain in the background as a supportive influence with the repair and EPA approval looking like it might take longer than expected. With Russian shipments tailing off due to tightness in the tanker market and the embargo, we would expect downside to be limited. The FOMC 50 basis point increase in the Fed Funds rate was expected and might provide stabilization to global markets.

Prices have been range bound since the spike higher on Monday, trading between 6.50 and 7 dollars for much of the week. The January contract tested both ends of that range today before late selling pushed prices down to fill Monday’s gap at 4.39 and ending the session with a loss of 50.5 cents at 6.43. Weather remains the driving force, as small decreases in HDD expectations in the back end of the forecast period rekindled concerns that the well-below normal temperatures called for will not materialize. For now the models are still pointing to above average demand starting at the end of this week to last through the end of the month, with the Christmas period still looking extremely cold for much of the US. Tomorrow’s storage report is expected to show a 45 bcf injection compared to the 5-year average build of 93. Weakness into the close today points to a test of initial support near 6.13 and below there at 6 dollars. A move higher will find limited resistance near 6.65 without much in the way until a retest of the 7 dollar level.