Prices reversed from Monday’s gains to a low of 88.27 basis October before stabilizing, but still settled with a loss of over two dollars at 89.55. The volatile downside move was linked to growing concerns over the outlook for economic growth and tighter monetary policies in Asia, Europe and the US, which would slow demand for petroleum products at a time when Russian export levels have held up better than expected. The API report yesterday did not help in dispelling bearish sentiment with the industry body indicating that crude stocks increased by .6 mb, with a decline of 3.4 and 1.7 mb in gasoline and distillate inventories respectively. Adding to the weakness has been the disconnect between physical markets and the paper markets with Saudi Arabia considering a cut in the Official Selling Price for October due to weak demand from China. Currently Chinese imports are at 8.69 mb/d, well short of their 2021 average of 10.26. The demand concerns were highlighted by The Joint Technical Committee of OPEC, suggesting the possibility for a surplus this year of 900 tb/d, up from 100 tb/d in its previous forecast with the market in surplus by 3.1 mb/d in September, .6 in October and 1.4 mb/d in November.

Support developed at the lower levels reflecting caution ahead of the OPEC meeting, and response to the DOE report. OPEC+ will meet on September 5th and has indicated there could be some discussion of production cuts, particularly if Iran reaches a nuclear deal with the West. No news regarding the lifting of sanctions has been indicated, but Iran’s buildup of afloat inventories and preparation to expand production does appear to be challenging other Arab countries control of the market.

The DOE report ran counter to the API. It showed commercial crude oil inventories falling by 3.3 mb, while gasoline stocks fell 1.2 mb and distillate rose .1. Net imports of crude totaled 2.0 mb, unchanged from last week. Some recovery in disappearance levels was noted with it totaling 20.1 mb but still off from last year when it reached 22.8 mb. Gasoline disappearance remained tepid at 8.6 mb compared to 9.6 mb last year, while distillate disappearance is being impacted by the high prices, falling to 3.6 mb from 4.4 mb last year. Net exports of crude and products fell to 2 mb but still remain sharply above year ago levels when we imported 1.5 mb.

For now, WTI looks to have priced in the bulk of bearish news as volatile consolidative price action in the 88-95 range might transpire as low US stocks and the OPEC meeting on September 5th remain in focus against a backdrop of deteriorating economic conditions. Key support on the downside continues to rest at 85.50 basis October. 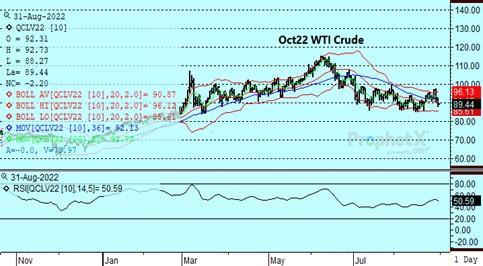 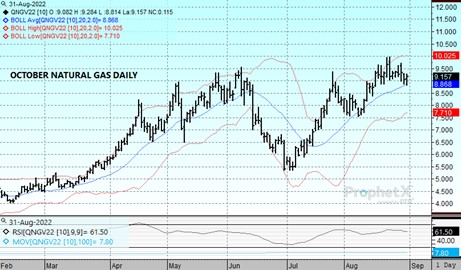 Despite making stabs below 9 dollars every day this week, the market has been unable to settle through that level, with a late recovery today leading to a settlement at 9.127 for a gain of 8 ½ cents on the session. Volatility in overseas prices has played a role, as sharply lower values were seen early in the week on talk that European regulators were considering a price cap on natural gas. Gazprom’s shutting of Nord Stream 1 took effect today, as prices recovered on concern that the announced 3 day shutdown would ultimately last longer. Production has been the other main price driver, with the weekend improvement to near 98 bcf/d waning by midweek to below 97. Tomorrow’s storage injection is estimated near 58 bcf verses the 5-year average build of 46. The 9 dollar level remains key support on a settlement basis, and below there at 8.86. Follow through strength will find little resistance before the 9.65 area, with 10 dollars the next target.