The petroleum complex traded under pressure despite OPEC+ decision to a small increase in production. Rising tension between the US and China over Taiwan following Pelosi’s visit helped magnify concerns over economic prospects following recent revisions downward in growth attributed to a weak global economy due to Chinese COVID lock downs along with the Ukraine war. Adding to pressure on values was the DOE report which showed a small build in commercial crude inventories. Also pressuring values later in the session were reports that Iran, US, and European Union will meet on Thursday to discuss a draft agreement that if accepted by negotiators would be passed on to foreign ministers for final approval. Doubts remain over how serious Iran is at reaching an agreement however.

In their sixth meeting since Russia invaded Ukraine, OPEC+ agreed to boost their collective oil production by 100 tb/d in September in line with estimates prior to the meeting. The OPEC+ alliance raised output in June by 648 tb/d for July and August. The pact agreed to last year and ended in August had rolled out monthly increases of 432 tb/d since last year putting the production target up to pre-pandemic levels. Many producers are producing below their allotted quotas due to a lack of investment and shortages of some drilling materials.

The DOE report showed commercial crude oil inventories rising by 4.5 mb, sharply above estimates of a draw down of .5 mb. Distillate stocks continue to decline falling by 2.4 mb while gasoline stocks were moderately higher by .2 mb. Estimates prior to the report were for a draw in gasoline inventories of 1.6 while distillate had been expected to build by .9 mb. Refinery runs increased by .6 percent to 92.8 percent. In the latest reporting week ending 7/29, net imports of  crude oil rose sharply to 3.8 compared to 1.6 mb last week. Net export of crude and products subsequently oulled back but still showed net exports of 546 t/b. Export levels of distillate due to demand from Europe remain strong at 1.6 mb compared to 1.3 mb.

The failure to respond to the OPEC+ decision has to be taken as disappointing and suggests that recessionary trends are still a source of concern along with prospective production increases outside OPEC+ and particularly in the US. In addition, fears rising tension between the US and China might also pressure economic growth along with the upcoming Iranian Nuclear negotiations, also are a force to reckon with given today’s move through the 91.00 level basis Sept and might open up potential for further declines toward the 88.00 and potentially 85.00 if progress is made with respect to the Nuclear negotiations. 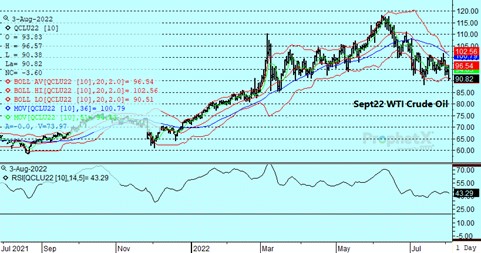 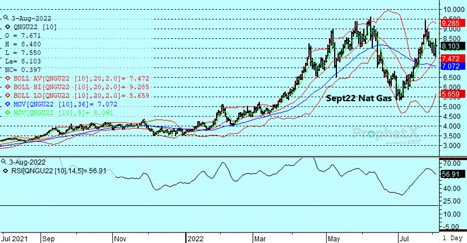 Prices staged a sharp rebound from early session lows which reached as low as 7.55 to settle  as much as .56 cents higher at the 8.26 level basis September. Ideas the market was oversold given the marked reduction in Russian supplies to Europe along with hotter forecasts for the US next week appeared to touch off active short covering and fresh buying interest. The prospect demand will reach as high as 101.3 bcf/d compared to recent forecasts as high as 98.4 bcf/d highlighted the low inventory levels ahead of winter. Given the expansion in output levels, the market might be challenged to the upside to improve upon today’s strong gains with 8.50 remaining good resistance basis Sept with support back near 8.00. The EIA report for the week ended July 29, 2022 is anticipated to show an injection of 29 bcf compared to the five year average of 33 bcf.