Overnight trade has SRW Wheat down roughly 3 cents, HRW down 1; HRS Wheat down 2, Corn is down 1 cents; Soybeans up 1;  Soymeal down $0.50, and Soyoil down  points.

Algeria’s state grains agency OAIC is believed to have purchased about 600,000 tonnes of optional-origin milling wheat in an international tender that closed on Thursday, European traders said in estimates on Friday.

Iranian state agency the Government Trading Corporation (GTC) is believed to have purchased an unknown volume of milling wheat in a tender for 60,000 tonnes which closed on Tuesday, European traders said on Thursday.

A government agency in Pakistan is seeking March 2021 arrival of 400,000 tonnes of wheat in a large new international tender, European traders said on Friday.

South Korea’s largest feedmaker Nonghyup Feed Inc. (NOFI) has issued an international tender to purchase up to 138,000 tonnes of corn to be sourced from optional origins, European traders said on Friday.

Iranian state-owned animal feed importer SLAL is believed to have purchased about 65,000 tonnes each of animal feed corn, feed barley and soymeal in international tenders which closed on Wednesday, European traders said on Thursday.

Soybean stockpiles in the United States are set to shrink to a seven-year low by next August, while domestic demand jumps to an all-time high. But prices are notably lower than in previous low-supply years.

Chicago soybean futures have risen more than 30% over the last three months, a very unusual trend during the U.S. soybean harvest. Most-active futures on Tuesday had their biggest single-day surge in more than a year after the U.S. Department of Agriculture slashed U.S. ending stocks on a smaller crop estimate.

U.S. stocks-to-use were projected at 10.4% back in September when Commodity funds have held near record bullish soybean bets since late September, right after futures moved above $10 per bushel. As of funds were packing on the longs, so the fundamentals have swung in favor of the bulls even more since then.

Chinese feed producers, pig farmers and traders are reshaping the global grain market as they scour the world for supplies amid a domestic shortfall that sent local corn prices to record highs and is expected to fuel global food inflation in 2021. 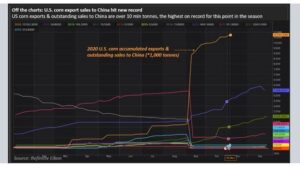 Food processor JBS SA, which reported a near nine-fold rise in third-quarter net profit, will double production capacity of its Brazilian Seara processed foods division by 2024, Chief Executive Officer Gilbeto Tomazoni said on Thursday in a call with analysts to discuss third-quarter results. Company executives also said JBS will be able to start production at its new pork plant in Missouri, which has capacity to process 11,000 tonnes of products like cooked and pre-cooked bacon per year. The Missouri plant is on track start operations in 2021.

Argentina’s wheat harvest is seen at 16.7 million tonnes, slightly down from the previous 17 million tonne estimate due to a prolonged drought, the Rosario Grains Exchange (BCR) said.

The estimate suggests wheat production in Argentina, a major global exporter, will be the lowest in five years, the exchange said late on Wednesday.  A drought since the middle of this year has caused major losses in wheat acreage in large parts of Argentina’s agricultural heartland.  BCR estimated a harvest of 50 million tonnes for soybeans and 48 million tonnes for corn.

Britain’s wheat imports rose sharply in September and are running at more than double last season’s pace, customs data showed on Thursday. Wheat imports for the month totalled 337,212 tonnes, up from 222,337 tonnes in August.

Malaysian palm oil futures fell on Friday after four straight sessions of gains, tracking losses in soyoil on the Chicago Board of Trade, with a weaker crude oil also weighing on prices.