The 11 to 16 day forecast for the Midwest has a bit less than average rainfall for the region and below average temps; temps may be flirting near 32 degrees in far northern sections of the Midwest by the end of the period (the GFS model showing colder temps then what the European model is offering). 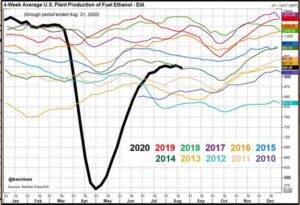 The Environmental Protection Agency has not made a decision on U.S. biofuel blending requirements for 2021 or on petitions from refiners asking to be exempted from past-year requirements going back to 2011, EPA Administrator Andrew Wheeler said; he could not assure that the agency will decide the 2021 Renewable Volume Obligations (RVO) by the Nov. 30 deadline due to the impact of the COVID-19 pandemic.

Wire story commented on U.S. ethanol production quickly bounced back after its pandemic-driven crash in late March and April, though both output and use have plateaued in the last month and remain below typical levels, a bit unsettling as far as corn demand is concerned.

China has proposed a “soybean industry alliance” with Russia as it seeks to deepen economic ties with its strategic partner – despite making a commitment to buy more of the oilseed from the US; the Commerce Minister called for closer cooperation with Russia in all areas of the ­soybean supply chain; also said Beijing and Moscow should “match up” their major soybean ­production areas and build an ­industry alliance.

The size of the soybean-planted area covered by agricultural insurance in Brazil may more than double in the 2020/21 season, reaching 10 million hectares (24.71 million acres) for the first time, after profitable prices boosted advance sales of about half of production even before planting begins in September.

Argentine grains inspectors represented by the Urgara union will hold a 36-hour wage strike starting on Friday, the labor group said in a statement on Wednesday, a move that could affect grains exports; discussions about the workers’ next raise should have started by the end of June, but had yet to begin.

Ukraine since the beginning of the new 2020/2021 marketing year (MY, July-June) and as of August 26 had exported 5.93 million tons of grain and legumes, which is 1.7 million tons less (due to corn) than on this date in the past MYG.

The European Union cut its duty on maize (corn) imports to zero on Thursday a day after lowering it to 0.26 euros/ton, the bloc announced; the new zero-rated duty is effective as of Thursday.

European wheat prices edged lower on Wednesday in a market that traders said was lacking direction in the absence of new fundamental elements and was under pressure from a poor export outlook this season; benchmark December milling wheat unofficially closed down 0.1% at 184.00 euros a ton.

Lean Hogs Up on Light Volume